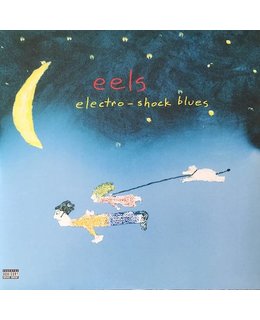 2015 EU reissue on 180g vinyl 2LP+download -The Eels' second release, Electro-Shock Blues, is a much darker album than their underrated debut, 1996's Beautiful Freak, but just as rewarding. Singer/guitarist/songwriter E experienced many upheavals in...

2015 EU reissue on 180g vinyl 2LP+download -The Eels' second release, Electro-Shock Blues, is a much darker album than their underrated debut, 1996's Beautiful Freak, but just as rewarding. Singer/guitarist/songwriter E experienced many upheavals in his personal life between albums (the passing of several family members and close friends), and decided to work his way through life's tribulations via his music. The result is a spectacular epic work, easily on par with such classic albums cut from the same cloth -- Neil Young's Tonight's the Night, Lou Reed's Magic and Loss. For some of the most introspective and haunting tunes of recent times, look no further than the title track, "Last Stop: This Town," and "Elizabeth on the Bathroom Floor." And although the lyrics deal almost entirely with mortality, the music for "Hospital Food," "Cancer for the Cure," and "Going to Your Funeral, Pt. 1" is comparable to Beck's funky noise, while "Efils' God," "The Medication Is Wearing Off," and "My Descent Into Madness" are all ethereal, soothing compositions. One of the finest and fully realized records of 1998, a must-hear.

Tracks:
A1 Elizabeth On The Bathroom Floor
A2 Going To Your Funeral Part I
A3 Cancer For The Cure
A4 My Descent Into Madness

D1 Ant Farm
D2 Dead Of Winter
D3 The Medication Is Wearing Off
D4 P.S. You Rock My World

Eels have had one of the most consistently acclaimed careers in music. The ever-changing project of principal singer/songwriter Mark Oliver Everett aka E, Eels have released 10 studio albums since their 1996 debut, Beautiful Freak. Mojo Magazine calls Everett "a member of rock's very own League of Extraordinary Gentlemen," while legendary troubadour Tom Waits says he "eagerly awaits each new release." In 2009 Eels began the release of an album trilogy: Hombre Lobo, End Times, and Tomorrow Morning, followed three years later by 2013's Wonderful, Glorious and the critically-acclaimed The Cautionary Tales of Mark Oliver Everett in 2014.

At 19, E found his father dead. His troubled sister, Elizabeth, committed suicide in 1996. And now his mother was terminally ill with lung cancer. That was his entire family. He ultimately decided he could not ignore these things artistically, feeling that anything else would be an act. So he set about the writing and recording of an album that was inspired by, and that would deal with the tragedies in his life, but only if it could offer a new point of view, and a positive resolution.

It was a challenge that E rose to on the critically acclaimed Electro-Shock Blues album, recorded 1997-1998 and released in 1998. Although a glance at the track list can often make people assume the album is "depressing," E called it "probably the most positive record I will ever make." The album, now considered a late 90s rock classic, reveals a life-affirming heart. Guests on the album included E's neighbors and friends, Mike Simpson of the Dust Brothers, Mickey Petralia, Grant Lee Phillips of Grant Lee Buffalo, Lisa Germano, Jon Brion, and T-Bone Burnett. Music videos for standout cuts "Last Stop: This Town" and "Cancer for the Cure" even found their way to MTV.