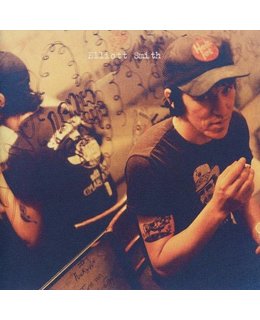 (1997) - 2015 EU reissue on 180g vinyl LP+download - Heart sewn firmly to his sleeve, Elliott continues his tuneful dissection of life & what makes it difficult. Whispering his way into your heart with the voice of an angel, Elliott...

2017 EU reissue on 180g vinyl LP+download - Heart sewn firmly to his sleeve, Elliott continues his tuneful dissection of life & what makes it difficult. Whispering his way into your heart with the voice of an angel, Elliott's new solo record, Either/Or, is the type of music you'd hear in Heaven s elevator: While everything's nice and pretty, you re still pretty bummed out that you died.

Smith shares all his personal secrets with us like other Smiths before him. (i.e. The Smiths, The Cure's Robert Smith, etc.) The result is nothing less than Zoloftian genius. I'll put money down that says this is the best album Kill Rock Stars releases for a couple of months. --Pitchfork

Tracks:
A1 Speed Trials
A2 Alameda
A3 Ballad Of Big Nothing
A4 Between The Bars
A5 Pictures Of Me
A6 No Name No. 5

''Drink up baby / Stay up all night / With the things you could do / You won't but you might / The potential you'll be / That you'll never see / The promises you'll only make''. So starts ''Between The Bars'', from Elliott Smith's third solo album Either/Or. It's as good a statement as any to describe the mood of this collection of songs about drug abuse, failed relationships and the pitfalls of stardom. Not that Elliott Smith the songwriter or performer isn't making the most of his own potential here. It's the downfall of his characters. Over the course of his first two solo outings, Roman Candle (Cavity Search) and his self-titled second effort (Kill Rock Stars), his fans are left to wonder if he isn't writing entirely autobiographically. It would be hard to imagine that the majority of his lyrics, so sincere and detailed, could be a work of fiction. With his admitted past drug use and problems with relationships (both family and otherwise), it seems clear these songs are him, raw and unedited.

Elliott Smith was still a member of Portland's Heatmiser at the time he recorded either/or, though that group would be broken up when it was released. Smith shared lead vocal duties with Neil Gust in Heatmiser, though he found himself recording and releasing his own acoustic-based material. His own music was much more sparse and personal than that of his previous group, which in no small part led to his breakout success. His bleak, Dylanesque lyrics have garnered a large, rabid, though specific audience, an indie-rock fanbase who can see the truth in the visuals Smith conjures. Film director Gus Van Sant was an early fan of his solo work, using many songs from either/or to underscore the drama of his 1997 film Good Will Hunting. The soundtrack spawned the Academy Award-nominated ''Miss Misery'', which led to an Oscar night performance, wedged between Trisha Yearwood and Celine Dion, of all people. During his award show performance, Smith looked as out of place and fragile as his song did, amongst the other nominees and their big, insincere songs. Overnight, the press tried to fit him with the mantle of (reluctant) spokesman for a young, seemingly lost generation.

...Smith has no interest in the attention he gets, or in the ensuing fame. He may be putting his life out there for the scrutiny of all, but he stills wants his privacy. This reluctance to play the game of celebrity is furthered in ''Angeles'', where ''Picking up the ticket / Shows there s money to be made / Go on and lose the gamble / That s the history of the trade''. But diatribes against fame and the press aren't the only topics on Smith's mind. His songs of heartache rival anyone else's, and with his whisper-thin voice, threatening to break at any moment (though it never does), the emotions on Either/Or are palpable...

Elliott Smith has proven to be one of the top singer-songwriters of his generation, and continues to write and record increasingly more intricate and diverse records. --Popmatters

Erstwhile Heatmiser member and prolific singer/songwriter Elliott Smith has now recorded three solo albums, and the brand-new Either/Or marks something of a thematic transition for him: Where the songs on his eponymous sophomore release were generally stark, guy-with-acoustic-guitar confessionals about drug abuse and darkness, there s brightness and a pop feel to his new Either/Or. And without comparing it to its predecessors, let's just say this: The album is incredibly goddamned good. Songs like ''Alameda,'' ''Speed Trials,'' ''Ballad of Big Nothing,'' and ''The Morning After'' are heart-breakingly melancholy, yet informed by a feel for classical-tinged pop a la The Beatles and, more recently, Jeremy Enigk. (And the two-minute ''Between The Bars'' is simply gorgeous beyond words.) Smith s terrific acoustic arrangements and uncanny ability to wring hooks from sadness make these songs worthy of pop success, but the fact is, they re probably too good to be played on the radio alongside that awful new Offspring single. It s hard to describe what Smith does so well without playing the album; suffice it to say that fans of Lou Barlow s softer side will be blown away. --The Onion A.V. Club