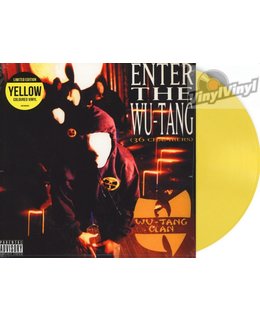 2018 EU repressed on COLOURED 180g -This groundbreaking '93 debut by the East Coast hip-hop collective Wu-Tang revolutionized the genre with its kung-fu samples, multiple aliases and genius production by RZA. Consisting of nine talented emcees, Enter The Wu Tang (36 Chambers) offered the first glimpse at a self-contained culture that spun its own symbols and shifting identities into hip-hops alternative as well as a half a dozen solo careers. Features the hip-hop classics "Method Man," "Wu-Tang Clan Ain't Nuthing Ta Fuck Wit," "C.R.E.A.M," "Can It Be All So Simple" and "Shame on a Nigga."

"It is rap music outside of this universe - a group with multiple nicknames rallying around kung-fu films, sampling forgotten soul songs and playing chess - and belonging to no time period, so it belongs to every time period...Since "Enter The Wu-Tang (36 Chambers)," the Wu-Tang Clan has released more great music than they're typically credited for - but "36 Chambers" is their landmark effort. Twenty years later, still nothing sounds quite like it; nothing can duplicate its hardest edges or most powerful passages..."Enter The Wu-Tang (36 Chambers)" is, and always will be, timeless." - Jason Lipshutz, Billboard

Tracks:
Shaolin Sword
A1 Bring Da Ruckus
A2 Shame On A Nigga
A3 Clan In Da Front
A4 WuTang 7th Chamber
A5 Can It Be All So Simple/Intermission
A6 Protect Ya Neck