Nederlands
Home A Day Without Rain 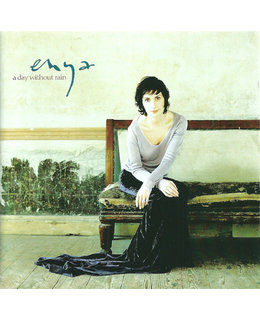 Tracks:
A1 A Day Without Rain
A2 Wild Child
A3 Only Time
A4 Tempus Vernum
A5 Deora Ar Mo Chroí
A6 Flora's Secret

As each new Enya release has washed over all who have ears to hear, as each heaven-touched work leaves admirers sitting speechless in slack-jawed wonder, questions eventually come to mind: Might her layered, choral-like approach gradually become predictable or stale? Will she ever exhaust her deep reservoir of soul-stirring ideas? Remarkably, A Day Without Rain, Enya's fourth release since her 1988 breakthrough, Watermark, establishes new artistic heights for the gifted Irish vocalist and keyboardist. The project, polished and refined over a five-year period in the company of longtime collaborators Nicky Ryan (producer) and Roma Ryan (lyricist), may qualify as her best yet--a radiant, beatific collection of works that command attention with their cathedral-like resonance as they soothe your spirit with some of Enya's loveliest, most graceful voicings ever. The disc's opening three tracks (including the spellbinding "Only Time") form a gorgeous trilogy that suggest Enya has deepened her focus on the nexus where sophisticated pop and regal mysticism, the twin rivers of her singular sound, form a seamless intersection. The disc's gentle timbre is disturbed only once, and in memorable fashion, with "Tempus Vernum," a marshalling of mythic sonic forces that brings to mind the theme from the De Beers diamond commercial, but with a Celtic/Goth edge. Additional highlights abound. The closing "Lazy Days" will leave your soul dancing in a shower of flower petals and sunshine. A wonderful recording. --Terry Wood