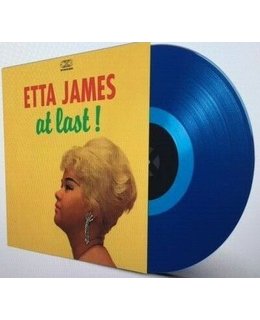 2018 EU reissue on 180g coloured vinyl LP = Including ’All I Could Do Was Cry’, ‘Stormy Weather’ and Willie Dixon’s Blues classic ’I Just Want to Make Love to You’ + four bonus tracks. This masterpiece remains to this day, one of the best Soul/R&B albums ever. Singing Pop standards as she did on the magnificent title track, which was written in 1941 and originally recorded by Glenn Miller’s orchestra. ’At Last’ became Etta’s signature song.

The 1960 debut album from the unmatchable Etta James includes what would become some of her best known songs – Etta James debut album At Last  on Chess subsidiary label Argo. The albums title track At Last in particular, is of course an all-time classic, and All I Could Do Was Cry, cowritten by future Motown mogul Berry Gordy both went to 2 on the R&B charts while the album itself has gone down in history as one of the great classic albums of early R&B , Recorded for the Chess Records subsidiary label Argo with bluesy string arrangements by Riley Hampton.

Amy Winehouse Back to Black =180g=