Nederlands
Home How Big, How Blue, How Beautiful 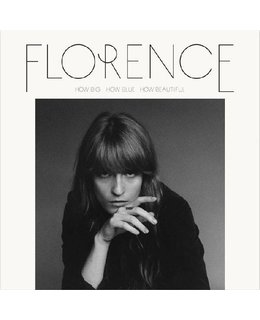 Florence and the Machine
How Big, How Blue, How Beautiful
2 x LP   standard   33⅓rpm

2015 EU issue on 180g 2LP-How Big, How Blue, How Beautiful is the brand new album from Brit and Grammy nominated multi-platinum selling musical artist Florence + The Machine, a collection of songs written and recorded over the past 12 months. Produce...

2015 EU issue on 180g 2LP-How Big, How Blue, How Beautiful is the brand new album from Brit and Grammy nominated multi-platinum selling musical artist Florence + The Machine, a collection of songs written and recorded over the past 12 months. Produced by Markus Dravs (Björk, Arcade Fire, Coldplay) the third album by Florence & The Machine is live-sounding, tune-rich, unhinged in all the right places and powerful in all the best ways. In voice and, ultimately, outlook Florence has never sounded better.

Tracks:
A1 Ship To Wreck
A2 What Kind Of Man

B1 How Big, How Blue, How Beautiful
B2 Queen Of Peace
B3 Various Storms & Saints

Where 2011 predecessor Ceremonials' lyrics focused on water, death and escapism, Welch says the new album's themes are more of the here and now. "The new album became about trying to learn how to live, and how to love in the world rather than trying to escape from it. Which is frightening because I'm not hiding behind anything but it felt like something I had to do."

UMPG’s Kid Harpoon (who co-wrote the Grammy-nominated "Shake It Out") collaborated on "Ship to Wreck" during a month-long creative furlough in Los Angeles that also yielded "What Kind Of Man." Kid Harpoon is one of a clutch of old collaborator friends who reunited to help marshal these most personal of songs. Ceremonials producer Paul Epworth helped create the album's closing psychedelic blues explosion "Mother," while the inner-circle of her nearest and dearest was rounded out by her bandmate and long-time studio right-hand-woman Isa Summers, with whom she wrote the epic title track.

"How Big, How Blue, How Beautiful was the first song I wrote for this record, literally as I just came off tour," Florence explains, "and then I went off and had this incredibly chaotic year, and that all went into the record. But in the end, the feeling of How Big How Blue is what I came back to. The trumpets at the end of that song – that’s what love feels like to me. An endless brass section that goes off into space. And it takes you with it. You’re so up there. And that’s what music feels like to me. You want it just to pour out endlessly, and it’s the most amazing feeling.” It’s alchemy. It’s magic. It’s the return of Florence + The Machine.

Amy Winehouse Back to Black =180g=