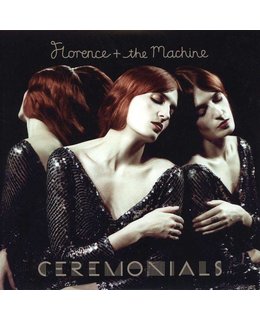 2011 EU vinyl editon 2011 -sophomore album from the British band led by singer/songwriter Florence Welch Ceremonials is a stunningly accomplished record by an artist teetering on the windblown top of her game an extraordinary testament to what Floren...

2011 EU pressed on stanadrd 2LP-Ceremonials is the sophomore release from Florence And The Machine, a recording group which features otherworldly English singer/musician Florence Welch and a collaboration of backing artists. The release follows-up the group's critically lauded 2009 debut, Lungs which won the MasterCard British Album award at the 2010 Brit Awards and was also nominated for a Best New Artist at the 53rd Grammy Awards. Ceremonials was recorded at London's Abbey Road Studios with producer Paul Epworth and features the lead single "What The Water Gave Me."

Tracks:
LP1
A1 Only If For A Night
A2 Shake It Out
A3 What The Water Gave Me
B1 Never Let Me Go
B2 Breaking Down
B3 Lover To Lover

LP2
C1 No Light, No Light
C2 Seven Devils
C3 Heartlines
D1 Spectrum
D2 All This And Heaven Too
D3 Leave My Body

Florence and the Machine -How Big, How Blue, How Beautiful