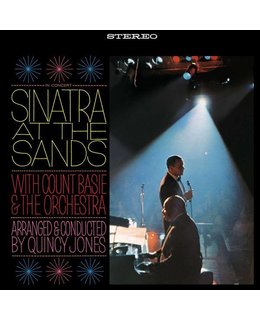 2016 EU issue on 180g 2xLP=This is a fully remastered reissue of a landmark album. With Count Basie & The Orchestra / Arranged & Conducted by Quincy Jones

Frank Sinatra. Count Basie. Quincy Jones. Las Vegas. This combination of performers and venue just don't get any better. And by every measure, Sinatra at the Sands is as good as music gets. Comprised of live material recorded during five nights in early 1966 at the famed Copa Room, Ol' Blue Eyes' 21-song album stands as one of his pinnacle achievements, the results a blend of superb chemistry, sparkling arrangements, infallible singing, and contagious energy.

Tracks:
A1 Come Fly With Me
A2 I've Got A Crush On You
A3 I've Got You Under My Skin
A4 The Shadow Of Your Smile
A5 Street Of Dreams
A6 One For My Baby (And One More For The Road)

C1 All Of Me (Instrumental)
C2 The September Of My Years
C3 Get Me To The Church On Time
C4 It Was A Very Good Year
C5 Don't Worry 'Bout Me
C6 Makin' Whoopee! (Instrumental)

By 1966, Sinatra had conquered the world. His tenure as a teen idol and maturing crooner behind him, he was confident, assured, focused, and quite simply, untouchable. Music's top arrangers and composers came to him, knowing the magic that he'd bring to their labors of love. It's for these reasons that Count Basie and his orchestra backs Sinatra here, and why Jones, in demand by everyone, chooses instead to lend his arrangement insights onstage at the Sands. Indeed, Sinatra at the Sands harkens back to the day's when concerts were a true event, and the album is nothing short that promise.

Containing many of Sinatra's most well-known and celebrated performances - "I've Got a Crush on You," "Fly Me to the Moon (In Other Words)" among them - Sinatra at the Sands finds the entertainer in immaculate voice. He improvises lines with effortless and ease, casually adorns lyrics with hidden rhythms, stretches notes to instill meaning and emotion, and utilizes his impeccable knack for phrasing to turn a line and beget instrumental responses that complement each song's mood. Meanwhile, Basie and Co. swing on uptempo numbers and lay back on melancholy tunes that still bring a tear to the eye. Everything here – the pacing, structure, passion, interpretation – is perfect.

Frank Sinatra Strangers in the Night

Elvis Presley Elvis Is Back - 180g