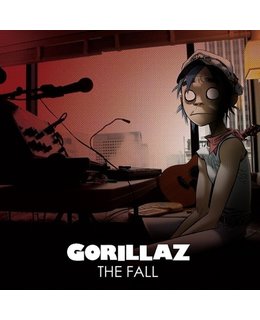 2019 EU repressing on vinyl lp- Collaborators include Mick Jones and Paul Simonon of The Clash and Bobby Womack, billed as "the World's First iPad Album".

The hook to The Fall is that it’s the first high-profile album to be recorded entirely on Apple’s iPad, Damon Albarn assembling these 15 song sketches as the Gorillaz tour rolled across America in the fall of 2010. In that sense, The Fall is not dissimilar from his limited-edition 2003 solo excursion Democrazy, which was also recorded in hotel rooms while on tour, yet The Fall has a higher profile -- it’s not a vinyl-only fan club release, it can be freely streamed from the Gorillaz official site and can be downloaded as part of a subscription package -- and thanks to the high-quality iPad apps it sounds polished, if not quite finished. Spectral hooks float in and out of the haze, sometimes the drum loops add definition, but for the most part The Fall is a rolling, moody aural travelogue, its song titles referencing specific cities (“Phoner to Arizona,” “Detroit,” “The Snake in Dallas,” “Aspen Forest,” “Seattle Yodel”), yet the music feels attached to no specific place -- it feels like a reflection of its time, namely, the autumn Gorillaz spent touring the U.S. It’s an aural journal, a sonic sketchbook that carries much of the same palette as Plastic Beach, yet it’s muted to the point that all the colors smear, the music taking on the same washed-out impressionistic qualities of The Good, the Bad & the Queen. Appealing as this may be, The Fall winds up a little ephemeral, its pleasures as fleeting as the scenery passing outside the windows of a tour bus.

Bobby Womack The Bravest Man In The Universe