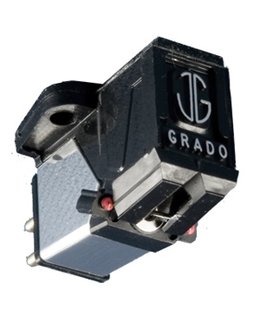 The newly redesigned Blue1 and Red1 have had their coil design reconfigured, and the effective moving mass of their generating system has been reduced by 17%. The Blue1 and Red1 models use a four piece OTL cantilever technology, standard oxygen free ...

The newly redesigned Blue1 and Red1 have had their coil design reconfigured, and the effective moving mass of their generating system has been reduced by 17%. The Blue1 and Red1 models use a four piece OTL cantilever technology, standard oxygen free wire in the coils and Grado's specially designed elliptical diamond mounted on a brass bushing. The Red1 model is selected from the Blue1 production run and meets higher test specifications. Approximately 10% of the production run will meet these standards and become Red1 models.

The Prestige (and upscale Reference) cartridges from Grado are the first released since the elder Grado's retirement, but they mark an evolution, not dramatic change, of the classic Grado style. There are three basic levels in the Prestige lineup: Black/Green, Blue/Red, and Silver/Gold. In each of these pairings, the latter model is the same as the former, but is able to meet more astringent test specifications. The Red, for instance, is taken from the top 10% of the Blue models production.

The Prestige Red is furnished with suitable mounting hardware and the unique tool required to separate stylus assembly from cartridge body.

taken from a review by James T. Frane:
I recently received the Grado Prestige Red Phono cartridge for review. It was packed in a container surrounded by padding in a sturdy outer cardboard box, ensuring that it arrived in perfect condition. All Grado Prestige cartridges have a fixed magnet and coils that generate a flux field axial pivot. A small generator disc is attached to the back end of the cantilever and moves within the lines of flux of the four coils and magnet generating a signal in response to stylus movement. The user-replaceable, elliptical diamond stylus is attached to the cantilever and moves within the four separate magnetic gaps which comprise what Grado calls a "flux-bridger" generator system. The generating element creates a flux increase in one gap while decreasing it in another to reduce distortion. According to Grado's literature, this design requires fewer coil turns, resulting in lower cartridge mass and electrical inductance. The cartridge is said to be insensitive to tonearm cable capacitance. The Grado cartridges are hand-built in the U.S.,and each cartridge is tested against Grado's standard for performance.........

..........There may be some recordable response differences between this cartridge and it's more expensive brethren, but it's difficult to imagine more pleasing and musical performance. The Grado Prestige Red is proof that one does not have to spend large amounts of money for good sound from a phono cartridge. More expensive cartridges may well provide incremental improvements in one or more areas, but the Grado performs at a level where such improvements will be small. I recommend that you consider this $ensible cartridge, as it is good value for the price.