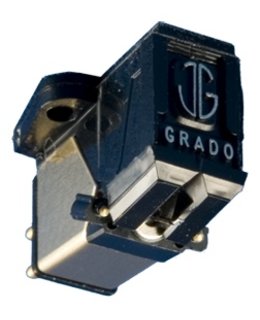 The newly redesigned Silver1 and Gold1 have had their coil design reconfigured, and the effective moving mass of their generating system has been reduced by 17%. The Silver1 and gold1 models use a four piece OTL cantilever technology, ultra-high puri...

The newly redesigned Silver1 and Gold1 have had their coil design reconfigured, and the effective moving mass of their generating system has been reduced by 17%. The Silver1 and gold1 models use a four piece OTL cantilever technology, ultra-high purity long crystal (UHPLC) oxygen free copper wire in the coils and Grado's specially designed elliptical diamond mounted on a brass bushing. The Gold1 model is selected from the Silver1 production run and meets higher test specifications. Approximately 5% of the production run meet these standards and become Gold1 models.

The Prestige (and upscale Reference) cartridges from Grado are the first released since the elder Grado's retirement, but they mark an evolution, not dramatic change, of the classic Grado style. There are three basic levels in the Prestige lineup: Black/Green, Blue/Red, and Silver/Gold. In each of these pairings, the latter model is the same as the former, but is able to meet more astringent test specifications. The Gold, for instance, is taken from the top 5% of the Silver models production.

The Prestige Silver is furnished with suitable mounting hardware and the unique tool required to separate stylus assembly from cartridge body.


taken from a review by Alan Sircom:

The Grado's presentation was extremely easy to live with and comfortably communicative. It didn't ram feisty music in my face but maintained it's lively character. For that reason alone, the Grado will probably gel in a great many systems.  It's a definite Best Buy!