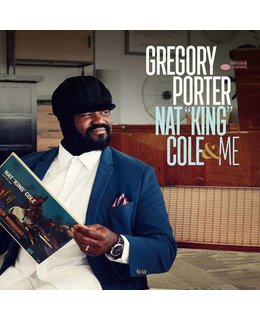 B1 Quizas,Quizas, Quizas
B2 Miss Otis Regrets
B3 Pick Yourself Up

LP2:
C1 When love Was King
C2 The Lonely One
C4 Ballerina
C5 I Wonder Who My Daddy Is

Also on board are Porter's longtime bandmates, pianist Christian Sands, bassist Reuben Rogers, and drummer Ulysses Owens. While primarily known for his contemporary, genre-crossing style of jazz and R&B, Porter here leans nicely into a distinctly old-school sound. Mendoza frames the singer's warm, supple voice with shimmering orchestral arrangements that wouldn't be out of place during the golden age of '50s and early-'60s traditional pop. While never mimicking Cole's distinctive style, Porter manages to straddle the line between evincing the storied artist's burnished vocal sound, and displaying his own virtuoso talents. Tracks like the Cole songbook regulars "Nature Boy," "Mona Lisa," and "The Christmas Song" are lushly arranged renditions that envelop the listener. Also engaging are the upbeat swingers like "Ballerina" and "L-O-V-E," which features a guest solo appearance from trumpeter Terence Blanchard. There's also a cinematic quality to many of the cuts, as on "Miss Otis Regrets," in which Mendoza's dramatic, classical-tinged opening quickly settles into an intimate, candlelit reading of the melancholy classic. Porter even applies his vintage-influenced approach to a reworking of his original "When Love Was King." Romantic, sophisticated, and rich with vocal prowess, Nat "King" Cole & Me lives up to both Cole and Porter's own immense creative reputations.

Elvis Presley If I Can Dream: with The Royal Philharmonic Orchestra