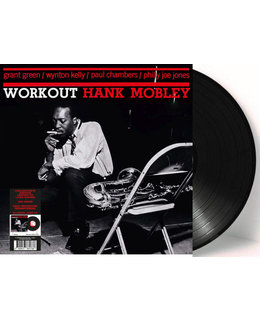 ( 1961 ) 2019 EU reissue on 180g LP= In a word association game, the name Hank Mobley will often generate Blue Note and vice versa. While Mobley had a musical life beyond the Blue Note label including associations with Dizzy Gillespie, Art Blakey's J...

2019 EU reissue on 180g LP limited to 1000 - Joined by Grant Green, Wynton Kelly, Paul Chambers and Philly Joe Jones, Mobley creates brilliant statements on four of his best originals (including the soulful "Uh Huh" and "Greasin' Easy"), "The Best Things In Life Are Free" and "Three Coins In A Fountain."

Tracks:
A1 Workout
A2 Uh Huh

Mobley's mastery of the style, his attractive tone, and his skill at writing songs that inspire memorable solos made him a perfect representative of the Blue Note sound. Even with his large number of great recordings, Workout is something special and a real standout.

The passion in Mobley's playing is exciting and will surprise many. He takes wild chances that challenge the other all-stars, and he plays with a constant stream of creative ideas. Even collectors who own a dozen other Hank Mobley albums will have to get this version of Workout!

Esquivel And His Orchestra Other Worlds Other Sounds =180g vinyl =