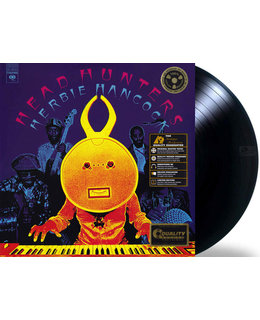 ( 1973 ) - 2015 US reissue HQ 180g vinyl audiophile LP -Herbie Hancock's best seller — a jazz-funk masterpiece now on 180-gram vinyl! This is one of Herbie's funkiest records and one of the best selling albums in Jazz, due to the fact it appealed to a br

The second highest-selling jazz album of all time!

2015 us reissue on HQ 180g vinyl audiophile pressing LP-This is one of Herbie's funkiest records and one of the best selling albums in Jazz, due to the fact it appealed to a broad audience - think Hip Hop, Funk, Soul & Jazz Funk fans. A defining release in the Jazz Fusion genre.

Tracks:
A1. Chameleon
A2. Watermelon Man

Herbie Hancock is one of the most prolific jazz pianists of the 20th century. A child prodigy, he played with the greats such as Donald Byrd and Miles Davis. As he was a bit of a geek, he enjoyed gadgets & buttons and he was one of the first to embrace and master the electric piano, but he always stayed true to the acoustic sound. In fact, he always bounced back and forth between his electronic and acoustic sound, touching upon almost every development in R&B, Funk and Jazz while retaining an original and distinctive voice.

Head Hunters (1973) was the first offering of Herbie's new backing band, the Head Hunters. In his own words: "I began to feel that I had been spending so much time exploring the upper atmosphere of music and the more ethereal kind of far-out spacey stuff. Now there was this need to take some more of the earth and to feel a little more tethered; a connection to the earth....I was beginning to feel that we (the sextet) were playing this heavy kind of music, and I was tired of everything being heavy. I wanted to play something lighter."

This is one of Herbie's funkiest records and one of the best selling albums in Jazz, due to the fact it appealed to a broad audience - think Hip Hop, Funk, Soul & Jazz Funk fans. With Head Hunters, Hancock claims a stake in Jazz with his infectuous synthesizers and clavinet melodies on top of a supertight groove, augmented by subtile horn soloing. Classic songs such as "Chameleon" and "Watermelon Man" are living proof of his genius and ability to craft a coherent jazz fusion album. Special mention for drummer Harvey Mason, bassist Paul Jackson and reedist Bernie Maupin (who also contributed to Miles Davis' Bitches Brew)

Head Hunters was a pivotal point in Herbie Hancock's career, bringing him into the vanguard of jazz fusion. Hancock had pushed avant-garde boundaries on his own albums and with Miles Davis, but he had never devoted himself to the groove as he did on Head Hunters. Drawing heavily from Sly Stone, Curtis Mayfield, and James Brown, Hancock developed deeply funky, even gritty, rhythms over which he soloed on electric synthesizers, bringing the instrument to the forefront in jazz. It had all of the sensibilities of jazz, particularly in the way it wound off into long improvisations, but its rhythms were firmly planted in funk, soul, and R&B, giving it a mass appeal that made it the biggest-selling jazz album of all time (a record which was later broken). Jazz purists, of course, decried the experiments at the time, but Head Hunters still sounds fresh and vital decades after its initial release, and its genre-bending proved vastly influential on not only jazz, but funk, soul, and hip-hop.