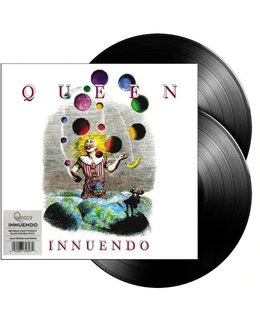 2015 EU halfspeed remastered on 180g Vinyl from the Original Master Tapes, Mastered By Bob Ludwig, Cut at Half-Speed at Abbey Road Studios, and Pressed at Optimal in Germany-

Queen's fourteenth studio album, and their first of the '90s, would prove to be the last album Freddie Mercury worked on, and yet also, despite his hugely deteriorating health, a work containing some of his most powerful and emotive vocal performances. Produced by Queen and David Richards, Innuendo contains several of the band's best known hits. Innuendo was released in February 1991 and a week later crashed the UK album charts at No. 1, ultimately achieving platinum status in their home country and going gold in America, the first Queen LP to do so since The Works in 1984. Sadly, however, though much of the material would have been perfect for the live show, none of it was ever destined to be heard in that context. Freddie lost his battle for life on Sunday November 24th 1991, nine months after the release of the album.

Freddie somehow found the strength to muster some truly breathtaking vocal performances for Innuendo, digging deep within himself and finding a depth and spirit like never before. He reached truly dazzling heights, seemed to find a new dimension to his voice, and poured his very soul into every note. As May would later recall, Freddie could barely stand up during the final sessions, every hour he was present at the Mountain studios required superhuman effort, and yet none of this is evident on the final album. It's impossible to believe that the extraordinary voice behind songs such as "Headlong," "All God's People," "Don't Try So Hard," "The Show Must Go On," and the album's title track, could have been recorded by someone as ill and physically weak as Freddie was.

When Innuendo finally emerged, with the cloak of secrecy around Freddie still tighter than ever, it was praised by fans as one of the strongest ever, and, most significantly, was universally acclaimed by the press too. The reviews were uncommonly flattering and with the title track song having already entered the UK charts at No. 1 a month earlier, Queen were very much back with a bang! In hindsight, many of the songs on Innuendo are extremely personal, and that was not necessarily evident at the time the LP first emerged. "The Show Must Go On," has to be singled out as probably the most poignant and emotive recording on the album, and the perfect Freddie Mercury swan song.

Queen's final two albums, Innuendo and Made In Heaven were actually formatted primarily with the CD in mind, with a longer running time, so the contents had to be edited down to fit them on to the two sides of a vinyl album. For the first time, these two albums have been cut at full length as double vinyl LPs!

D1 The Hitman
D2 Bijou
D3 The Show Must Go On