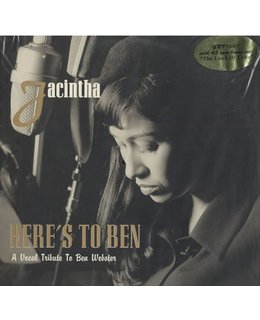 2007 US limited edition 9track audiophile LP pressed on 180gm Virgin Vinyl &(2-LP set) Jacintha's U.S. debut is a tribute to the legendary tenor saxophone player: Ben Webster. The songs have been specially selected to reflect this premise, i.e. they...

2007 US reissue Limited edition, audiophile 180 g vinyl LP with bonus 45 - Mastered by Bernie Grundman direct from the original analogue masters. - The 1st artist to be released Groove Note Records has already became a legend in her own time! Already a tremendous figure in her native Singapore, Jacintha has been turning heads and ears in this country as well. With an outstanding singing style on par with the greats, Jacintha will enrapture you in a perpetual state of musical bliss! (We're not ones for overstatement either.)

Jacintha debuts in the U.S. with a tribute to the legendary tenor saxophone player: Ben Webster. The songs have been specially selected to reflect this premise, i.e. they are mostly great vocal standards and/or ballads that have been recorded by Webster many times and are thus associated with his particular style and name. Some of these songs like Stardust, How Long Has This Been Going On, Georgia and Our Love is Here to Stay, Over The Rainbow are Webster classics. One song - Burt Baccharach s The Look of Love (which only appears on the audiophile vinyl LP and 24K Gold CD) is the audiophile Bonus Cut. Issued along with the first 1500 LP s as a limited time only reward to the small but dedicated LP market for their support of this special medium.

The limited edition 45rpm features Danny Boy on the B-side. Recorded at the famous OceanWay Recording Studios in Los Angeles, this recording is all-analogue, direct to two-track.

Tracks:
A1 Georgia On My Mind
A2 Our Love Is Here To Stay
A3 Tenderly

B1 Somewhere Over The Rainbow
B2 How Long Has This Been Going On?

Jacintha recording, a selection of Johnny Mercer tunes, is the most lovely. Let me first state that I am not a fan of the "beautiful woman sings beautiful songs, recorded in full audiophile sound" genre, and, fortunately, this album misses that category. Sure, Singapore-born Jacintha fits the beautiful tag, as does her voice. And the numbers certainly were and remain state-of-the-art in popular song. But Jacintha brings the soul of a jazz singer and the skill of a true interpreter to the proceedings. As famous as "Moon River," "Here’s To Life," "One For My Baby" and "Autumn Leaves" are, she sings them as freshly as the day they were written. Her fellow musicians, Teddy Edwards on tenor, Kei Akagi on piano, Darek Oles on bass, Larance Marable and Joe LaBarbera on drums, Anthony Wilson on guitar, Will Miller on trumpet and Artie Butler on Hammond, all offer sensitive and inspired accompaniment, especially Edwards. And, of course, Joe Harley does his usual excellent and tasteful job of producing (he also produced the McShann album). The result is an album that steps lightly and swings with grace, but also has depth and body. Recommended then, and not just as an audiophile toy, but solely because of the music. The fact that it is a true demo album is an added, if not insignificant, bonus. - Toddwarnke soundstage