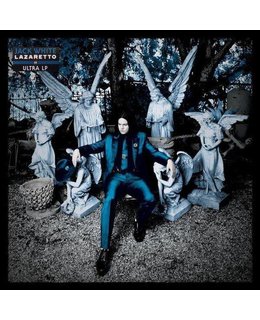 The aforementioned Blunderbuss was the first U.S. #1 album of Jack's storied career, also debuting at #1 in the UK, Canada, and, naturally, Switzerland. The album was supported by an ambitious world tour featuring two backing bands, the all-male Buzzards and all-female Peacocks, notched up five Grammy nominations including Album of the Year, and dominated Best of 2012 lists, including being named MOJO's #1 album of 2012.

"That rattle and clang can only mean one thing: Jack White's comin' 'round the mountain, pushing his trusty rusty shopping cart of American musical artifacts and curiosities. This time, he's peddling his second solo album, Lazaretto, the latest in a long line of records he's more or less masterminded since his days fronting the White Stripes...On Lazaretto, White rummages through his cart and emerges with fiddles, organs, slide guitars, and fuzz boxes powered by hand-cranked generators.

"And is that a leftover plate of Ennio Morricone's Western spaghetti? Indeed, it is, and if it all adds up to a better album than his debut, Blunderbuss, the reason may be his choice of collaborator: his 19-year-old self. As White has said in interviews, he wrote most of the music months before he composed the lyrics, and in order to find inspiration, he borrowed from poems and one-act plays he wrote 20 years ago, when he was all hunger and no experience. Now, he's a man of the world - a jokester and snake-oil salesman who also happens to be a fantastic singer and songwriter." - Kenneth Partridge, Billboard

Tracks:
A1 Three Women [Written-By – Blind Willie McTell]
A2 Lazaretto
A3 Temporary Ground
A4 Would You Fight For My Love?
A5 High Ball Stepper
A6 Untitled
A7 Untitled

Can The Singles =3LP=

Queens Of The Stone Age - Songs For The Deaf