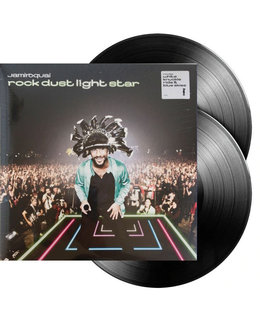 2010 EU issue on 180g 2LP-Coming a half-decade after 2005's Dynamite, 2010's Rock Dust Light Star finds Jamiroquai and its frontman, Jay Kay, trying to re-ignite the funk machine by heading back to its rock and organic soul roots. In that sense, R...

B1 All Good In The Hood
B2 Hurtin'
B3 Blue Skies

Coming a half-decade after 2005's Dynamite, 2010's Rock Dust Light Star finds Jamiroquai and its frontman, Jay Kay, trying to re-ignite the funk machine by heading back to its rock and organic soul roots. In that sense, Rock Dust retains much of the black-light disco power that made such previous singles as "Little L" from 2001's A Funk Odyssey and "Feels Just Like it Should" from Dynamite such dancefloor burners. However, the album is a bit of a grower, with Kay evincing more of an interest in knotty, long-form funk numbers that take their sweet time to reach their inevitable, euphorically funky pop pinnacle.

Nonetheless, Kay, having entered his forties, doesn't seem to be letting up on the disco gas -- nor the literal kind as the helicopter and Porsche-sploitation video for the funky slick single "White Knuckle Ride" proves. Still, Kay has revealed more of a passion for laid-back, acoustic guitar-driven tracks, and the mid-album ballad "Blue Skies" is perhaps the best one he's ever written. The more booty-minded faithful get a bevy of tracks including the aforementioned "White Knuckle Ride," as well as the Jazz Crusaders-sounding "Smoke and Mirrors" featuring a muscular saxophone solo outro. Elsewhere, Kay delves into the bluesy slow-burn acid rock of "Hurtin'," which takes its time to build to a wicked, soulful climax, and then the oft-headdressed singer goes all '80s robot-disco-funk on the Jaco Pastorius bass-inspired "She's a Fast Persuader." Ultimately, with the album's mix of horns, various percussion instruments, piano, and a general live-in-studio vibe combined with a mature "deep cut" songwriting approach, Rock Dust Light Star does bring to mind the more full-band sound of Jamiroquai's early acid jazz albums and goes a long way toward reestablishing Kay as a uniquely talented and legitimate heir to the '70s funk throne.