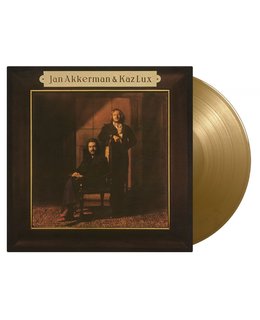 (1976 ) 2020 EU repressed coloured 180g LP-Album of virtuoso Blues, Funk & Prog by Holland's most prolific musicians received the Dutch Edison Award for Best Album in 1976. First reissue ever!
The concept album Eli (1976) was the result of the collabora

The concept album Eli (1976) was the result of the collaboration between 2 of the most prolific musicians in Dutch history. After leaving Prog heroes Focus in the mid seventies, guitarist Jan Akkerman teamed up with singer Kaz Lux of the equally legendary Prog band Brainbox.

Eli is a celebration of everything Folk, progressive Blues and Funk, weaved together with the virtuoso string play of globally acclaimed guitarist Akkerman. It's exactly 40 years ago since he was voted best guitar player in the world by Melody Maker, which makes this the perfect time to reissue this wonderful album, which was awarded the Dutch Edison Award for Best Album in 1976.

Tracks:
A1 Eli
A2 Guardian Angel
A3 Tranquillizer
A4 Can't Fake A Good Time