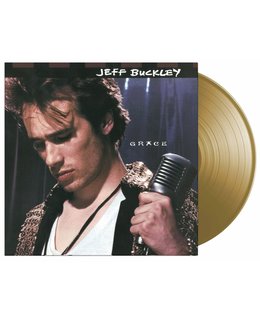 2019 EU reissue on limited 180g gold coloured vinyl Lp- Resembling at times a soft-sung Robert Plant, Buckley was an intuitive vocalist capable of dizzying arabesques and choir-boy sweetness. He is joined here by a tight band for 10 tracks highlighting his stylistic range--Pearl Jam bluesy on "Eternal Life," impossibly serene on Leonard Cohen's "Hallelujah," art-school noisy on "So Real," Led Zep daring on "Mojo Pin." Unorthodox, this was the debut of '94.

Highlights include the unforgettable “Last Goodbye” and Buckley’s immaculate cover of Leonard Cohen’s “Hallelujah.”Enigmatic Singer/Songwriter's Ethereal 1994 Debut.  Grace is a masterpiece. The critically acclaimed breakthrough is filled with sweeping choruses, bombastic arrangements, searching lyrics, and above all, the richly textured voice of Jeff Buckley, one of the finest singers of his or any other generation.

Cohen murmured the original like a dirge, but [...] Buckley treated the [...] song like a tiny capsule of humanity, using his voice to careen between glory and sadness, beauty and pain [...] It's one of the great songs.

"Jeff Buckley was piecing together a contemporary popular music history for himself that was steeped in the magic of singing," notes Daphne A. Brooks in her book on the late vocalist/guitarist's scintillating Grace. A debut that keeps growing in stature, the mystical album harnesses doo-wop, pop, rock, Indian, jazz, and folk idioms and reshapes them into an elegant aural concoction that has no likeness. Buckley's tragic passing shortly after the record's release has only heightened its magnificence and status. So, too, have the prized sonic merits.

Recorded in the fall of 1993 at Bearsville Recording Studio in Woodstock, NY, and ranked #304 on Rolling Stone's 500 Greatest Albums of All Time list, Grace wonderfully captures the incredible stylistic range of the promising singer/songwriter. Unhinged and full of life, Buckley harnesses dramatic choruses, bold arrangements, and mystical lyrics while singing everything from devotional love songs to philosophical musings in a rich, textured voice that has no equal. The impassioned 10-song set features seven originals, one cover performed with his band, and two covers performed solo.

At times sounding like Robert Plant, Van Morrison, and his father Tim, but with an emotional gravitas all his own, Buckley takes the listener on a heartfelt and nuanced journey highlighted by the atmospheric opener "Mojo Pin," the soaring title track "Grace," yearning "Last Goodbye," and an immaculate rendition of Leonard Cohen's "Hallelujah."

"Buckley had a voice like an oversexed angel, and the songs here shimmer and twist. The fierce rocker "Eternal Life" upends Led Zeppelin's take on the blues while honoring it: Instead of a hellhound on his trail, Buckley, who drowned in 1997, evokes immortality bearing down on him."
--Rolling Stone's 500 Greatest Albums of All Time