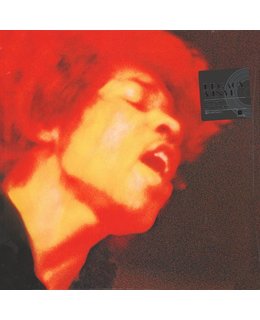 (1968) 2015 EU reissue on 180g vinyl 2LP = considered to be one of the greatest rock albums of all time,with his widely praiser cover version of Bob Dylan's All Along The Watchtower. hits The Burning Of The Midnight, Lamp Crosstown Traffic, Voodoo Child(S

2015 EU repressing on 180g 2LP=Written & produced by Jimi Hendrix, Electric Ladyland is considered to be one of the greatest rock albums of all time,  includes the classic hits The Burning Of The Midnight, Lamp Crosstown Traffic, Voodoo Child(Slight Return), Gypsy Eyes and his widely praiser cover version of Bob Dylan's All Along The Watchtower.

Tracks:
A1 And The Gods Made Love
A2 Have You Ever Been (To Electric Ladyland)
A3 Cross Town Traffic
A4 Voodoo Chile

The great manifesto of the psychedelic rock era, the Jimi Hendrix Experience's Electric Ladyland is the culmination of resounding experimentation and several years of band chemistry, as well as Hendrix's continual development as a guitarist seemingly capable of anything. The trio's final studio recording together, it's also the band's most adventurous, and collaborative. Steve Winwood, Al Kooper, Buddy Miles, Jack Casady, and Chris Wood all make guest apprearances. Featuring everything from sensitive wah-wah playing ("Burning of the Midnight Lamp") to the all-time best version of Bob Dylan's "All Along the Watchtower," with Hendrix infusing the song with requisite mystery and mayhem, to the magnetic riff passages of "Voodoo Child (Slight Return)," Electric Ladyland remains one of the most fully realized and referenced recordings in history. And until now, it's never received the sonic facelift it's not only needed, but deserved.

Gary Moore Still Got The Blues