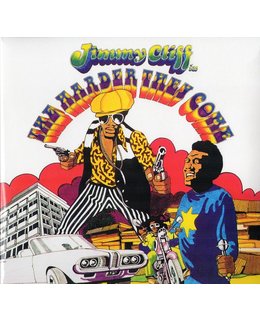 2018 EU reissue on 180g LP = The soulful influence behind many rivers to cross or sitting in limbo. A must for any collection. This 1973 film broke reggae into U.S. pop culture with Jimmy Cliff's Many Rivers to Cross ; the Maytals' Pressure Drop , and the rest of its stellar soundtrack.

with classics from Toots & the Maytals ("Pressure Drop," "Sweet and Dandy"), Desmond Dekker ("Shanty Town"), the Melodians ("Rivers of Babylon"), and the Slickers ("Johnny Too Bad"). Cliff himself gets pole position, however, getting in the first ("You Can Get It If You Really Want") and last ("The Harder They Come") words in this first-rate reggae primer, which also features Cliff's enduring "Many Rivers to Cross." --Sam Sutherland

Jamaican filmmaker Perry Henzell made reggae an integral player in his gritty 1973 saga of a renegade Kingston singer who becomes a modern Robin Hood, casting one of the style's earliest stars, Jimmy Cliff, in the lead, and filling this soundtrack--here presented in a remastered version

Tracks:
A1 Jimmy Cliff - You Can Get It If You Really Want
A2 Scotty - Draw Your Brakes
A3 The Melodians - Rivers Of Babylon
A4 Jimmy Cliff - Many Rivers To Cross
A5 The Maytals - Sweet And Dandy
A6 Jimmy Cliff - The Harder They Come

This Heat This Heat