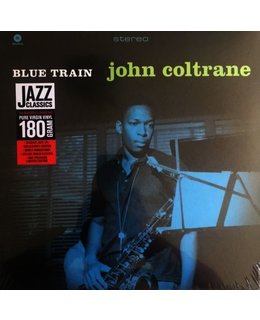 (1 957 ) - 2010 EU re-issue on 180g vinyl LP+bonus track- A classic, an album often heralded as one of the greatest records of the 1950s by fans and jazz educators alike.  It gives the listener a very clear view of what made these musicians so great. You

2010 EU re-issue on 180g vinyl LP+bonus track- A classic, an album often heralded as one of the greatest records of the 1950s by fans and jazz educators alike.  It gives the listener a very clear view of what made these musicians so great. You will notice things like Coltrane's (and pianist Kenny Drew's) tasteful and masterful usage of the blues scale in the chant-like title cut. Many musicians have the tendency to drive that scale into the ground when playing the blues. Not so here: these guys were well beyond that sort of thing. On Jerome Kern's "I'm Old Fashioned," you will hear Coltrane's (or was it Kenny Drew's?) ascending-stepwise reharmonization. The Lee Morgan and Curtis Fuller solos on "Locomotion" are a delight, but that's true of the entire album.

B1. Locomotion
B2. I'm Old Fashioned
B3. Lazy Bird

John Coltrane only recorded one album as a leader for Blue Note, but it was the turning point of his career and one of his greatest hours. 31 at the time of 1957’s Blue Train, Coltrane had been largely unknown just two years earlier. In 1955 he began a very important two-year stint with Miles Davis that gave him visibility and found him growing rapidly as an improviser. By 1957 when he left Davis and became a member of the Thelonious Monk Quartet for a few historic months, Coltrane had his own innovative voice. He was at the top of the field along with Sonny Rollins and was considered a young giant. Coltrane’s style, which often featured him, grouping together an explosive series of notes that were called sheets of sound, was unprecedented and years ahead of his contemporaries. Blue Train stands as proof of both Trane’s originality and his dazzling style. Heading an all-star hard bop sextet that included the 19-year old Lee Morgan (the brightest new trumpeter in jazz) and trombonist Curtis Fuller, Coltrane took an astounding solo on “Blue Train” (one in which every note in his long improvisation fits perfectly) and introduced what was arguably his greatest composition, “Moment’s Notice.” All five performances on Blue Train (including a definitive rendition of “I’m Old Fashioned”) are filled with memorable and classic moments. While Coltrane only worked for Alfred Lion on this one occasion, this very stirring set is full of timeless magic. After Blue Train was recorded, there was never again any doubt that John Coltrane was a giant.