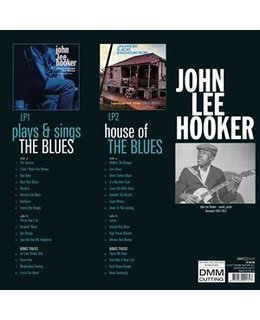 2015 EU repressing on 180g vinyl 2LP=Two great original albums placed on a double vinyl. 'Plays & Sings The Blues' did not appear until 1961 on the Chess label, but the songs found within are actually much older. The earliest songs "Mad Man Blues" and "Hey Boogie" were recorded in 1950, while the remaining tracks come from two sessions recorded in Detroit in March 1951 and April 1952 for Chess.

The second LP 'House Of The Blues' collects material from 1951-1953. Songs such as "Leave My Wife Alone", the stark "Sugar Mama", "Ramblin by Myself", "Louise", "High Priced Woman" and many more are featured on this record.

Tracks:
LP1: ( Plays & Sings the Blues )
A1 The Journey
A2 I Don't Want Your Money
A3 Hey Baby
A4 Mad Man Blues
A5 Bluebird
A6 Worried Life Blues
A7 Apologize
A8 Lonely Boy Boogie
B1 Please Don't Go
B2 Dreamin' Blues
B3 Hey Boogie
B4 Just Me And My Telephone
B5 Let Your Daddy Ride (Bonus Track)
B6 Queen Bee (Bonus Track)
B7 Wednesday Evening (Bonus Track)
B8 I'm In The Mood (Bonus Track)

Known to music fans around the world as the "King of the Boogie," John Lee Hooker endures as one of the true superstars of the blues genre: the ultimate beholder of cool. His work is widely recognized for its impact on modern music – his simple, yet deeply effective songs transcend borders and languages around the globe. Each decade of Hooker's long career brought a new generation of fans and fresh opportunities for the ever-evolving artist.

Originally released on Chess Records in 1959, House Of The Blues collects material Hooker cut between 1951-1954 including the chilling "Leave My Wife Alone," and spare "Sugar Mama" which find the Hook by his lonesome on guitar and vocals while Eddie Kirkland adds to the dynamics with fine guitar accompaniment on "Louise" and "High Priced Woman."

This 1959 House of the Blues Chess album collects 1951-1954 efforts by John Lee Hooker. Some important titles here are the ominous "Leave My Wife Alone," the stark "Sugar Mama," "Ramblin' by Myself," and with Eddie Kirkland on second guitar, "Louise" and "High Priced Woman."

Willie Dixon I Am the Blues - Blue coloured vinyl