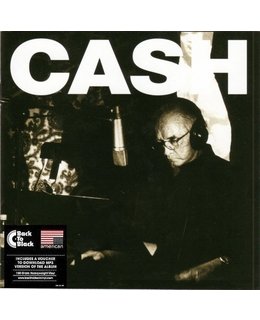 2014 EU Vinyl LP + download edition, pressing on 180gram vinyl. Cash's first posthumous release, American V debuted at #1 on both the Billboard Top 200 and the Country Albums chart, and contains 12 tracks recorded in 2002-2003 including the original, “Like The 309” (the last song that Johnny wrote and recorded before he died). Cut from the Original Masters Under the Strict Supervision of Rick Rubin and Pressed at QRP Record Pressing Plant.You Can Expect these Award-Winning Albums to Sound Incredible

Although he began his career as an outlaw to the Nashville establishment, Johnny Cash has come to literally define and embody country music. At first, his unique mix of hillbilly music with gospel and blues made him a perfect fit at Sam Phillips' Sun Records, where he recorded such classics as "Folsom Prison Blues" and "I Walk The Line."

From there, Johnny signed with Columbia records and embarked on one of the most remarkable musical careers of the twentieth century. Transforming into The Man In Black, Johnny spent more than thirty years reinventing and contradicting himself - breaking all of the rules of traditional country music only to emerge as the ultimate mythic hero and archetype of the genre.

No other artist has touched the world of music quite like Johnny Cash. He is the only person to be inducted into the Country Music Hall Of Fame, The Rock And Roll Hall Of Fame and The Songwriter's Hall Of Fame. His very name is synonymous with the fight for the rights of the poor and downtrodden and the image of "The Man In Black" is as deeply American as the stars and stripes themselves.

American V: A Hundred Highways (2006) is a continuation of the highly popular and critically acclaimed series of Johnny Cash recordings produced by Rick Rubin. The series began with 1994’s acclaimed American Recordings, followed by Unchained (1996), American III: Solitary Man (2000) and American IV: The Man Comes Around (2002).

"These songs are Johnny’s final statement. They are the truest reflection of the music that was central to his life at the time. This is the music that Johnny wanted us to hear.” - Rick Rubin