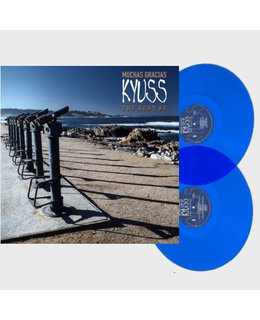 2023 EU limited blue transparent vinyl 2xLP -collection including nine of the band's would-be hits (four of them in previously unreleased live versions) with no less than six album leftovers and B-sides.

Tracks:(2LP)
A1 Un Sandpiper
A2 Shine
A3 50 Million Year Trip (Downside Up)
A4 Mudfly
B1 Demon Cleaner
B2 A Day Early And A Dollar Extra
B3 I'm Not
B4 Hurricane

Kyuss was an American rock band, formed in Palm Desert, California in 1987. The band disbanded in 1995, and, since then, members of Kyuss have gone on to form or play in several notable bands including Queens of the Stone Age, Fu Manchu, Dwarves, Eagles of Death Metal, Mondo Generator and Them Crooked Vultures.