Nederlands
Home Journey So Far - The Best Of Loreena McKennitt 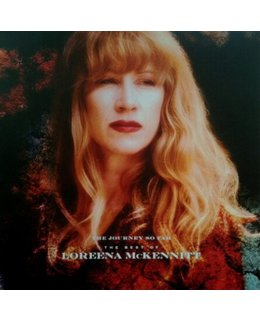 Label:  columbia
Availability:   In Stock
Delivery time:
€24,95 Incl. VAT (BTW)
Release date: 30-09-2016(originally released in 2014)
2016 reissue on 180g vinyl LP+download = Press play and enter the world of Loreena McKennitt, where walls dissolve into thick, billowing mists as the ground beneath your feet turns to compacted earth and the sky above opens up to reveal a black cloak dotted with shimmering stars draped beneath silk-like clouds.
This album surveys singer and songwriter Loreena McKennitt's three-decade recording career, drawing a dozen key songs from her eight studio albums
Tracks:
A1 The Mystic's Dream (Album Edit)
A2 Bonny Portmore
A3 The Bonny Swans (Album Edit)
A4 The Mummer's Dance (Single Remix)
A5 Down By The Sally Gardens
A6 Stolen Child
B1 The Lady Of Shalott (Album Edit)
B2 Marco Polo
B3 Penelope's Song
B4 Huron 'Beltane' Fire Dance
B5 The Old Ways
B6 Dante's Prayer

The Journey So Far - The Best of Loreena McKennitt is a commemorative recording to celebrate 30 years as a performing and recording artist. This captivating retrospective, follows along an exotic sonic road of career highlights reflecting the scope and diversity of Loreena McKennitt's musical catalog and world travels.

The 12-song set traces the highlights of McKennitt's career which includes sales of over 14 million albums, 2 Grammy nominations, and a once in a lifetime journey in the footsteps of the Celts. Culled from her double platinum album The Book Of Secrets and platinum releases The Mask and Mirror and The Visit among others, this “Best Of” collection brings together rich cultural textures like the weave of an exotic musical tapestry, with an eye on history and a foot in the present.

"When I look back on the road from where I have come, the people I've met, the places and experiences which have informed the music, or even where we created or recorded, I marvel at how rich my journey has been," says Loreena.

Loreena McKennitt To Drive the Cold Winter Away =LTD=

Melody Gardot My One and Only Thrill

Norah Jones Come Away with Me