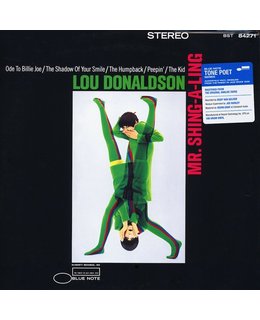 His second stint at Blue Note (after short stop-offs at the Argo and Cadet labels) came in the wake of founder Alfred Lion’s departure in 1966 and lasted until 1974. During that time he recorded 13 albums – among them Alligator Bogaloo and Mr Shing-A-Ling – and earned renown as a purveyor of infectious, danceable grooves that married jazz improv with gospel fervour and James Brown-influenced funk.

Donaldson was just four days shy of his 41st birthday when he took his quintet (trumpeter Blue Mitchell, organist Lonnie Smith, guitarist Jimmy “Fats” Ponder and drummer Leo Morris) into Van Gelder Studio on 27 October 1967 to lay down the five songs that were released in mid-January 1968 as Mr Shing-A-Ling.