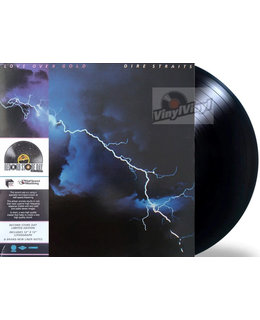 Anchored by the 14-minute-plus opener "Telegraph Road," and by Knopfler's atmospheric leads and head-turning tonalities, Love Over Gold is a modern classic.

A number one album in the UK following its original release in September 1982, the album featured two singles ‘Private Investigations’ and ‘Industrial Disease’. This limited edition reissue for Record Store Day will feature an embossed lithograph, plus an insert with a brand new essay about the album including a new interview with Mark Knopfler, and a certificate of authenticity from Abbey Road Studios.

Part of the reason for the band’s uniqueness owes to its clean, vibrant sound. Just as Knopfler’s narratives reflect poetic and surrealist texts, the group’s arrangements--an intoxicating combination of easygoing shuffles, bluesy boogies, and pop-honed ballads--mirror the old-fashioned soulfulness and spaciousness inherent in the classic recordings of the late 50s and early 60s. It’s no wonder why Dire Straits has long been a favorite of audiophiles the world over. When it comes to sonic purity, transparent soundstages, and rich tonalities, few, if any bands sound better.

And now, thanks to the meticulous efforts of Warner Bros., Dire Straits’ 1982 LP can be experienced like never before. Remastered and cut from the original analog tapes and pressed on high-quality 180g vinyl, Love Over Gold will bowl you over with its mesmerizing sound and engaging material. Knopfler’s mesmerizing guitar textures and cool vocals appear as if they’re right in front of you. Details, imaging, and presence are on a level associated with the finest audiophile recordings.