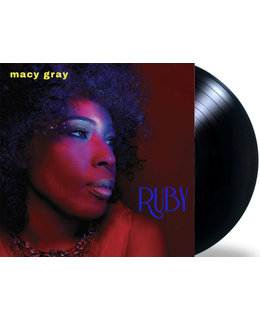 2018 issue on 180g vinyl LP=Macy Gray, selling over 25 million total albums globally and collaborating with everyone from Ariana Grande and the Black Eyed Peas to Galactic is back with a new album! It includes the single 'Sugar Daddy' which she co-wrote

2018 issue on 180g vinyl LP=Macy Gray, selling over 25 million total albums globally and collaborating with everyone from Ariana Grande and the Black Eyed Peas to Galactic is back with a new album! It includes the single 'Sugar Daddy' which she co-wrote with Meghan Trainor and is her 10th album. She has enchanted fans all over the world, because of her smooth voice which has consistently resounded throughout Pop culture. She is a great songwriter and singer capable of writing for almost every genre, from Pop, to Jazz and R&B. This new release of her own is no exception.

Tracks:
A1 Buddha [Featuring – Gary Clark Jr.]
A2 Cold World
A3 Over You
A4 White Man
A5 Tell Me
A6 Sugar Daddy

Macy Gray’s voice reminds one of being wrapped up in a blanket of sunlight. Soulful, warm, and iconic, Gray’s vocal magic has made sweet love to our ears yet again in her tenth studio album, Ruby. Calling Ms. Gray’s 43 minute album “ambitious” might be putting it mildly. Ruby spills with poetic love ballads, New Orleans brass, and R&B soul that leaves one heartbroken and exhilarated all at once. This album will cause listeners to feel the sudden need to dance around the French Quarter, cry in the rain, and fall madly in love with a stranger across the jazz bar- all in one sitting.

Her songs range from playful and sunny, to downright dark. The fun really seems to come out in songs like “Sugar Daddy” co-written by pop artist Meghan Trainor, “Just Like Jenny” with a jazzy ode to the equal rights movement, and “Over You”.

Although the majority of Ruby is uplifting, there are several downpours of sorrow overcasting these tracks. “But He Loves Me” deals with a woman unable to leave an abusive relationship, despite “all the scars”. Although the melody of “White Man” may be energetic and cheerful, the lyrics shamelessly address the racism and sexism blooming in Trump’s America. “Tell Me” sticks out as a soul crushing track, tackling the painful beauty that emerges from unrequited love.

This album is appropriately called Ruby, because it’s a pure gem. Whoever says music has lost all soul clearly has never heard Gray’s new album.