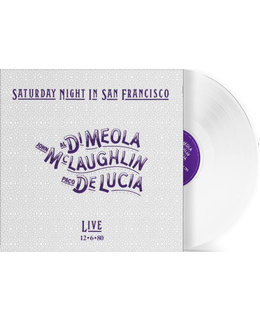 2022 EU issue on 180g clear vinyl LP - The precursor " Friday Night In San Francisco ", recorded at the Warfield Theatre in San Francisco on December 5, 1980 (and originally released in 1981), is considered one of the most successful acoustic guitar albums ever.

An iconic album treasured for capturing three legendary and diverse guitar virtuosos – Al Di Meola, John McLaughlin, Paco De Lucia (1947-2014) – at the height of their unparalleled mastery highlighted by a superbly nuanced and stunningly realistic recording. The reason why the original concert is such a milestone and went beyond the niche audience, becoming a mass product, is the unique mix of jazz, fusion, flamenco, and Mediterranean music. For 40 years, nobody knew that the recording of the Saturday show existed… until now! Combing through hours of the original 16-track live session tapes, Al Di Meola and his team have curated a breathtaking follow-up: Saturday Night In San Francisco.