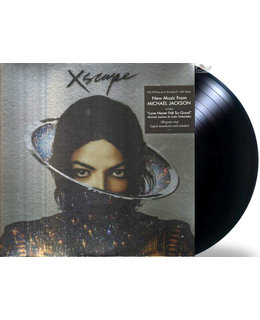 2014 EU issue on vinyl LP-Xscape is a long awaited collection of exciting new music that will thrill the legions of fans of one of the world’s most revered and best-selling artists, as well as attract a whole new generation discovering his artistry for t

2014 EU issue on 180g LP+download- Long Awaited New Music from the King of Pop featuring 8 Never-Before-Heard Tracks- Fans all over the globe. XSCAPE id being released by Epic Records in conjunction with the Estate of Michael Jackson and was executive produced by L.A. Reid, along with other producers including Timbaland, Rodney Jerkins and John McClain. XSCAPE features eight never-before-heard tracks.

B1. Slave To The Rhythm
B2. Do You Know Where Your Children Are
B3. Blue Gangsta
B4. Xscape

Xscape is a long awaited collection of exciting new music that will thrill the legions of fans of one of the world’s most revered and best-selling artists, as well as attract a whole new generation discovering his artistry for the first time.

That’s right—there’s a new Michael Jackson album, and it’s amazing. Culled from songs left off of previous albums, these eight songs have been lovingly reworked by some of the best producers alive—Timbaland, Jerome “J-Roc” Harmon and Rodney Jerkins, among others. The result is the proper follow-up to 2001’s Invincible, and an album that surpasses that one (and thankfully doesn’t come off as a sloppy posthumous cash-in, thanks to the effort involved and brisk run-time), capping off a brilliant career that sadly ended tragically, before Jackson could give us the comeback he was prepping for. By now, you have to have heard “Love Never Felt So Good.”

It’s like something out of a time capsule in the best possible way, having been written by Jackson and Paul Anka in the early ’80s but only having been released by Johnny Mathis. This version is a lost classic that we’re lucky to have, unearthed and polished to perfection by Timbaland and co., whose tasteful synth strings, piano and moving bassline give the perfect backdrop for Jackson and Anka’s stirring arrangement and Jackson’s heartfelt vocal. The production crew gives similar love to the rest of the tracks, placing Jackson’s voice front-and-center on “Chicago,” whose squelching synth bass and sparkling keys recall classic Timbaland tracks of the ’90s. “Loving You” has a stately, ’70s Motown feel, boosted by drums that crack loudly through the mix. Occasionally the production tricks can threaten to mask Jackson himself—“Slave to the Rhythm” is as Britney-ish as its title would suggest. But on “A Place With No Name,” it’s a perfect marriage between Jackson’s vocals and the new production, creating a new banger that Jackson no doubt would have been thrilled to perform. And “Do You Know Where Your Children” is breathtaking, shooting into the stratosphere on a throwback electro production and a particularly spirited performance from Jackson, whose harmonized choruses have never sounded better. Rather than tarnish Jackson’s legacy, Xscape serves as a terrific final statement. No Jackson fan should miss hearing it.