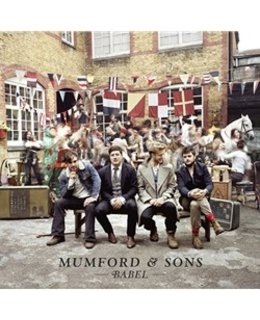 2012 EU issue on 180g vinyl  LP -2013 Grammy Award Winner for Album of the Year!  the second studio album by the British indie folk band Mumford & Sons= When Mumford & Sons entered the studio to commence work on their second album, Babel, in August of 2011, they never envisaged it would be to follow-up a debut record that had connected with so many music lovers from all different corners of the globe, and all the roads in-between. Their success is even something the four members struggle to trace. "It sort of just happened," Marcus Mumford has often mused to journalists.

The earliest memories of the band performing together are within the close confines of a rehearsal room in Putney, and of last minute street-side jamming sessions on the pavement outside Bosun’s Locker (a now defunct basement venue on Kings Road in London) ahead of a show. It was a scene already common to the band as musicians falling in and out of bands of each and every genre. Ben Lovett and Marcus were already working on songs together from their school days, but those songs didn’t realise their full potential until Winston Marshall (armed with a banjo and dobro), and Ted Dwane (double bass, but with a penchant for being a multi-instrumental marvel) had learnt and lived those songs, given them new arrangements, and injected them with a real ‘band’ dynamic.

Even then they were reticent to make it ‘official’. The name Mumford & Sons was eventually chosen as it suggested a wholesome, family business. It suited the relationships that had grown within the band. They were brothers in all but blood relation, and they very quickly became inseparable. As is typical in London, if a good band forms, word tends to travel quickly. Within a few months, Mumford & Sons were releasing their eponymously named debut EP, through the fledgling independent Chess Club Records label. It featured the first, self-produced recordings of "Roll Away Your Stone," "Awake My Soul" and "White Blank Page" and sold-out instantly.The live shows were rammed to the rafters in London, which was soon replicated across the whole of the UK.

It’s often the case that the demands of touring can break a band in half. It’s a relentless, unforgiving part of band life, but Mumford & Sons thrived upon it. They never wanted it to end, and they still never want it to end. "We don’t really know what to do with ourselves when we’re back in London. It feels uneasy, unnatural even, not to be on a bus going somewhere," Ben Lovett commented after the band had walked offstage at Glastonbury in June 2011. And tour they did. Relentlessly. The British and Ireland shows were selling out with each and every passing tour. A second EP was released, Love Your Ground, which featured the band’s own recordings of "Little Lion Man" and the firm live favorite, "Feel The Tide." It was bookmarked by more touring, into Europe and back again, ahead of the final in a trilogy of vinyl only EP releases, The Cave & The Open Sea.

It was only the need and desire to record the debut album that brought Mumford & Sons back to London for longer than a pit-stop. They settled into Eastcote Studios with producer Markus Dravs (Arcade Fire, The Maccabees) and Sigh No More was released in the UK in October of 2009 through the band’s own Gentlemen of the Road label and Island Records. It debuted in the album charts at 11 (peaking at #2, some seventy-two weeks later). “It’s been a crazy eighteen months, but a whole lot of fun.” Suggests Ted back in the Glastonbury dressing room, moments after the band had drawn a suitably huge crowd across to The Other Stage.

The achievements of Mumford & Sons since the release of Sigh No More has been a success story rarely matched of recent years, in an industry we’re regularly led to believe is in constant decline. It’s a story, however, that has been written and mapped out on the road. From a ten-day live adventure across India, to sold-out arenas in America and Australia, and from the festival fields of Europe, to impromptu parks on the Railroad Revival Tour in America, each and every town and city that has welcomed the band has been treated to a jubilant and suitably intimate performance, regardless of the size of venue.

Off the road, Sigh No More is a record that has garnered much acclaim. It’s an album that won the band a UK Brit Award in 2010 (Best Album), and was nominated for the prestigious Mercury Prize Award in the same year. Outside of Britain, Mumford & Sons picked up two Grammy nominations (Best New Artist, Best Rock Song), and put in a typically assured live performance alongside Bob Dylan covering "Maggie’s Farm" at the awards themselves. Sigh No More has incredibly sold in excess of 4 million copies globally.

And as they found themselves back in London to record this second album, you’ll find this band of brothers are still very much the same people. A little wiser, a lot more experienced, but eager to get out of London armed with their new album and get back to their spiritual home; the road. Babel's 12-songs were again produced by Markus Dravs and engineered by Robin Baynton. The album will be released via Glassnote Records.

"We are more than excited to release Babel into the world. We had started writing new songs well before we got into the studio to record. At first, we peeled ourselves off the road quite reluctantly. We love playing live, obviously, but it had also become an important part of our creative process, we had been writing and rehearsing in soundchecks, and sort of ‘road-testing’ new songs on our very gracious audiences. But then we fell in love with recording again. The album started to come together, and with the help of Markus Dravs once more (and engineer Robin Baynton), we started to relish the challenge of making this album. As a band, we’ve never been closer or more collaborative, all working to our strengths. And so we feel that this record is a natural progression that we’re proud of, and we cannot wait to take it out on the road." - Mumford & Sons