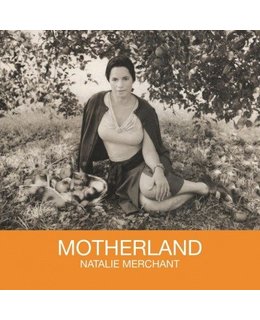 Natalie Merchant's Motherland album (2001) is dedicated to the victims of the 9-11 plane crashes, which occurred just days after recordings were finished.

Experienced producer and artist T. Bone Burnett brings his expertise to the table, which pays off in terms of its aural expression and positioning Merchants songs in one coherent, excellent album. Her voice has deepened and her lyrics are socially conscious and intelligent, as always. Musically, each song stands on its own and fits seamlessly into the collection of tracks that make up Motherland.

This is what the press said about Motherland:

'Low-key stunner.  A collection of such power, beauty and finely distilled emotion that it took my breath away.  This record is simply devastating.'  The Times

'A singer and writer's album.  Sparkling of tune and fiercely intelligent. ****'  Guardian

'I think Natalie Merchant's most recent album, Motherland, is the finest piece of work she's ever made. I play this album non-stop. The title track is so like Jacques Brel it makes me cry; it's just sensational stuff.  The album is timeless; it does not sound as if it will ever date or you will ever get fed up with it. And that is such an incredible thing to achieve.'

'A mesmerising voice that sounds like she's seen all the trouble in the world.  Motherland is a collection of 12 haunting and weird folk tales.'  Gay Times

'The songs are underpinned by altruism, a fierce intelligence, and an overt but non-alienating feminism.'  Mojo

'Motherland makes rich use of her sonorous, emotional well of a voice.'  Observer

'A courageous work.  Natalie's voice is warm, soulful and poignant.  Motherland has a depth that reveals something new every time you play it.  ****'  What's On Album of the week

'Her most diverse album yet.'  Q

'Merchant has a dramatic, richly supple voice with a rootsy twang that is equally impressive delivering a haunting 'Motherland', a banjo-flecked, Neil Young-like 'Saint Judas' or a low-slung, smoky 'Build A Levy'.'  The Times

Nick Cave/Nick Cave & The Bad Seeds Push the Sky Away