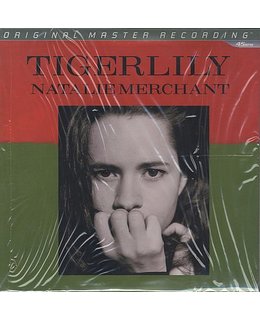 2007 US strictly limited edition  45RPM Half-Speed Mastered 2LP set, pressed on 180gram HIGH DEFINITION VINYL -Though the minor hits "Wonder" and "Jealousy" bore a reasonable resemblance to Merchant's work with 10,000 Maniacs, most of Tigerlily clearly established her as a solo artist apart from her former band. The record's first single, "Carnival", drove that point home, with a hook based more on rhythm than melody and the haunting voice of Katell Keineg adding an intriguing dimension to the chorus. Elsewhere, much of Tigerlily is remarkably solemn and subtle, from the low-key opener "San Andreas Fault" to the widower's lament "My Beloved Wife" to the eight-minute opus "I May Know the Word". Also of note is "River", an emotional ode to friend and fallen star River Phoenix

Tracks:
A1 San Andreas Fault
A2 Wonder
A3 Beloved Wife

B1 River
B2 Carnival

Tom Waits One From The Heart ( And Crystal Gayle ‎) =MOFI=