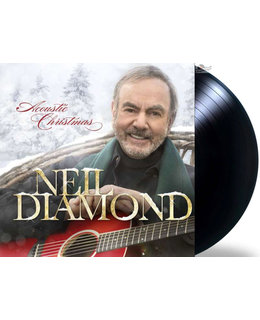 Label:  Capitol
Availability:   In Stock
Delivery time:
€21,95 Incl. VAT (BTW)
Release date: 06-12-2016
2016 EU issue on standard vinyl LP -Re-teaming with Don Was and Jacknife Lee, the pair who produced his 2014 album Melody Road, Neil Diamond cut Acoustic Christmas, his fourth holiday album and first since 2009's A Cherry Cherry Christmas. The title Acoustic Christmas suggests that this 2016 LP will be sparse, but it's hazy and open, consisting of much more than a man and a guitar. Usually he's supported by a full band -- a rhythm section, another guitarist, a keyboardist, and backing vocalists -- and that gives Acoustic Christmas some spunk, which is enough to keep things lively. If Diamond isn't always original -- his version of "Children Go Where I Send Thee" follows the contours of Nick Lowe's 2013 version exactly -- he nevertheless performs with gusto, particularly on the closing "Christmas Medley." That showmanship is ultimately what gives Acoustic Christmas its personality and is the reason to return to the record: it may not align with the spirit of the season, but it's charming nonetheless. ALLMUSIC
Reviews:
the acoustic renditions on the first seven songs -- from "O Holy Night" to "Silent Night" --are contemplative and beautifully arranged and movingly performed by the Man With the Voice like Hot Chocolate, Neil Diamond.
Discs: 1
Drager(LP,EP,12,7,CD): LP
Qual(120grs,150grs,180grs): standard
Speed(33,45): 33
Label: Capitol
This release: 2016