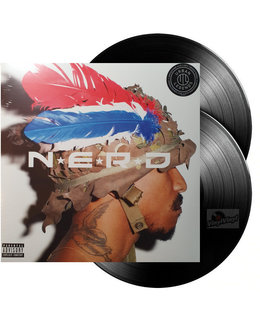 2010 - 2220 reissue on180g vinyl 2LP= N*E*R*D'(Pharrell Williams, Shae Haley en Chad Hugo)s 2010 album Nothing. It includes the Daft Punk-produced Hypnotize U and Hot and Fun, which features Nelly Furtado, and will be released on Monday (2 November).

2020 reissue on 180g vinyl2LP =the fourth effort from Pharrell Williams, Chad Hugo and Shae Haley. Formed as a concept band in their hometown of Virginia Beach, in 2000, N*E*R*D stands - defiantly - ten years later as a group of musicians who have worked tirelessly to carve out and conquer a new space in an otherwise nebulous musical world.