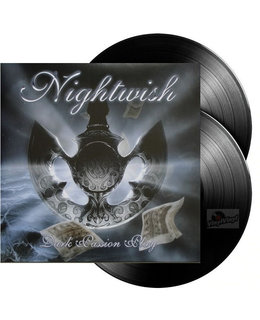 ( 2007 ) - 2013 EU reissue on 180g 2LP -With Nightwish's at its most powerful and convincing on the opening "The Poet and the Pendulum" (all 14 minutes of it), the dynamic "Bye Bye Beautiful," and the infectious pop-inflected "Amaranth." But mid-album tra

2013 EU reissue on 180g vinyl 2LP -Nightwish returns with an ambitious epic metal opus that begins promisingly enough but quickly devolves into another formulaic power rock affair. The band's at its most powerful and convincing on the opening "The Poet and the Pendulum" (all 14 minutes of it), the dynamic "Bye Bye Beautiful," and the infectious pop-inflected "Amaranth." But mid-album tracks such as "Sahara," "For the Heart I Once Had," and the limpid closer, "Meadows of Heaven," retread familiar ground that reminds us of epic metal's more disappointing tendencies--faux pop, bombastic bombast, anemic anthems, and a penchant for the maudlin. With new vocalist Annette Olzon in the ranks, the Finnish outfit stands poised to make a thoroughly convincing and wholehearted classic (listen to "The Islander" for further proof) but falls short, delivering a decent but distracted recording. It's too ambitious, too scattered, and, simply, too long--and that's too bad. --Jedd Beaudoin

Although it is their sixth studio album,Dark Passion Play marks the beginning of a new era for Finnish symphonic metal masters Nightwish. With new vocalist Annette Olzon onboard, Nightwish returns with their most accessible material to date. Firmly rooted in their trademark symphonic sounds featuring elaborate keyboard and guitar parts blended seamlessly with intricate string and choir sections, Olzon's vocals have more pop sensibility as they are far less operatic than those of her predecessor. This is perfectly exemplified in the vocal melodies in Amaranth, Eva and the scorching duet with bassist Marco Hietala titled Bye Bye Beautiful. Nightwish mastermind Tuomas Holopainen (keyboards) not only wrote all the lyrics and all but two songs on the album, but also helmed the project as one of the producers along with T.C. Kinnunen and Mikko Karmila, who also mixed the album. Dark Passion Play has already made history as Finland's most expensive recording project to date with massive string sections and choirs and it is clearly evident in the impeccable production. Nightwish have taken the symphonic elements of their prior works and infused them with a new voice to create a sound representative of the album title: dark, playful and, most of all, passionate.