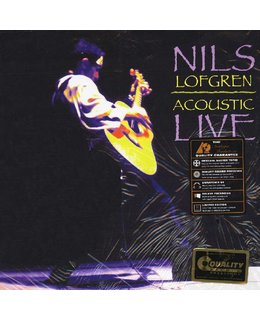 2015 200g 2LP from Analogue Productions=Acoustic Live is a small treasure for longtime Nils Lofgren fans. Capturing Lofgren alone in front of an appreciative audience, knocking out such favorites as "You," "No Mercy" and "Keith Don't Go," plus...

Label:  Analogue Productions
Availability:   Out of Stock
Delivery time:   coming again soon
€74,95 Incl. VAT (BTW)
released date: 30-10-2015(originally releaesd in 1997)
2015 Limited Edition 200g 2LP from Analogue Productions-Remastered by Ryan Smith at Sterling Sound=Acoustic Live is a small treasure for longtime Nils Lofgren fans. Capturing Lofgren alone in front of an appreciative audience, knocking out such favorites as "You," "No Mercy" and "Keith Don't Go," plus six new songs. Even with the new songs, there are no real revelations, only a selection of little gems that will certainly bring a smile to the face of any longtime Lofgren fan.
A true triple threat, Nils Lofgren has distinguished himself as the writer of melodic, affecting, and hard-rocking songs, a sensitive and seemingly ageless singer, and a guitarist of incomparable power and imagination. Along with his diverse work as a solo artist, Lofgren has been a member of Bruce Springsteen & The E Street Band for the past three decades and is a former member of Neil Young's Crazy Horse, working on such iconic recordings as After the Gold Rush and Tonight's the Night.
Acoustic Live is a classic January 1997 show recorded brilliantly by Ron Freeland at the Barns of Wolftrap in Vienna, Virginia. Nils is unplugged and in top form here performing alongside his brothers Tom, Michael and Mark Lofgren and Paul Bell. Featuring takes on many of his most beloved songs including "Black Books," "Keith Don't Go," "No Mercy" and "You," plus a few new cuts, the album has been cited frequently in tech mags for it's stellar sound quality and remains the artist's best selling release to date!
Features:
• 200g vinyl pressing from Analogue Productions
• Remastered by Ryan Smith at Sterling Sound
• Plated and pressed at Quality Record Pressings
• Stoughton Printing old-style tip on jacket
Tracks:
A1 You 3:36
A2 Sticks And Stones 4:10
A3 Some Must Dream 6:09
A4 Little On Up 5:03
B1 Keith Don't Go 6:50
B2 Wonderland 3:23
B3 Big Tears Fall 5:17
B4 Believe 4:13
C1 Black Books 5:46
C2 To Your Heart 3:32
C3 Man In The Moon 3:35
C4 I'll Arise 3:08
D1 Blue Skies 4:16
D2 Tears On Ice 4:22
D3 All Out 3:22
D4 Mud In Your Eye 2:44
D5 No Mercy
Discs: 2
Drager(LP,EP,12,7,CD): LP
Qual(120grs,150grs,180grs): 200grs
Speed(33,45): 33
Extra info: =remastered =Quality Record Pressing
Label: Analogue Productions
This release: 2015

Neil Young After the Gold Rush