Nederlands
Home Blues And The Abstract Truth (with Bill Evans) 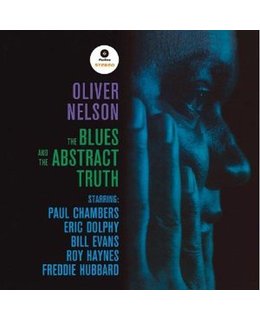 (1961) - 2013 EU reissue on 180g LP- A must buy for all jazz fans, and a Top Ten or Top 50 favorite for many, a historic landmark. With generous support from such jazz luminaries as Bill Evans, piano, Freddie Hubbard, trumpet, Paul Chambers, bass, Roy Ha

2013 EU reissue on 180gram LP -A must buy for all jazz fans, and a Top Ten or Top Fifty favorite for many. Recorded by the founder of the Impulse label, Creed Taylor, Oliver Nelson's The Blues And The Abstract Truth is a historic landmark,  recording Oliver Nelson plays alto and tenor saxophone on his own compositions and arrangements here with generous support from such jazz luminaries as Bill Evans piano Freddie Hubbard trumpet Paul Chambers bass Roy Haynes drums and Eric Dolphy alto sax and flute.

The Blues And The Abstract Truth is Oliver Nelson's lasting contribution to the heritage of the American jazz idiom.

Tracks:
A1 Stolen Moments
A2 HoeDown
A3 Cascades

allmusicguide:
As Oliver Nelson is known primarily as a big band leader and arranger, he is lesser known as a saxophonist and organizer of small ensembles. Blues and the Abstract Truth is his triumph as a musician for the aspects of not only defining the sound of an era with his all-time classic "Stolen Moments," but on this recording, assembling one of the most potent modern jazz sextets ever. Lead trumpeter Freddie Hubbard is at his peak of performance, while alto saxophonists Nelson and Eric Dolphy (Nelson doubling on tenor) team to form an unlikely union that was simmered to perfection. Bill Evans (piano), Paul Chambers (bass), and Roy Haynes (drums) can do no wrong as a rhythm section. "Stolen Moments" really needs no comments, as its undisputable beauty shines through in a three-part horn harmony fronting Hubbard's lead melody. It's a thing of beauty that is more timeless as the years pass. The "Blues" aspect is best heard on "Yearnin'," a stylish, swinging, and swaying downhearted piece that is a bluesy as Evans would ever be. Both "Blues" and "Abstract Truth" combine for the darker "Teenie's Blues," a feature for Nelson and Dolphy's alto saxes, Dolphy assertive in stepping forth with his distinctive, angular, dramatic, fractured, brittle voice that marks him a maverick. Then there's "Hoedown," which has always been the black sheep of this collection with its country flavor and stereo separated upper and lower horn in snappy call-and-response barking. As surging and searing hard boppers respectively, "Cascades" and "Butch & Butch" again remind you of the era of the early '60s when this music was king, and why Hubbard was so revered as a young master of the idiom. A must buy for all jazz fans, and a Top Ten or Top Fifty favorite for many.