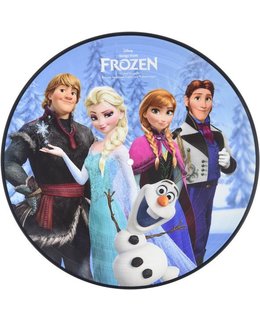 2014 EU issue on 180g pciture disc vinyl - Featuring 10 Songs from the Biggest Soundtrack of the Year!

Walt Disney Records is set to release Frozen: The Songs featuring all 10 songs from the Oscar-winning film. The Frozen soundtrack is the top-selling album of 2014 and spent 33 consecutive weeks in the top 5 on the Billboard 200 chart, including 13 consecutive weeks at No. 1. It is certified triple Platinum, selling more than 3.2 million units and over 8.4 million tracks. The "Let It Go" film clip from Frozen has been viewed over 300 million times on YouTube.

It is the fifth highest grossing film of all time and the highest grossing animated film earning more than $1.27 billion globally. Released wide domestically on Nov. 27, 2013, Frozen posted the No. 1 industry all-time Thanksgiving debut and Walt Disney Animation Studios' biggest opening ever.

Tracks:
A1 Frozen Heart
A2 Do You Want To Build A Snowman?
A3 For The First Time In Forever
A4 Love Is An Open Door
A5 Let It Go

OST - Soundtrack- Songs from Beauty and the Best =Disney=

OST - Soundtrack- Songs From The Hunchback Of Notre Dame =Disney=

Various Artists Beauty and the Beast (The Songs)