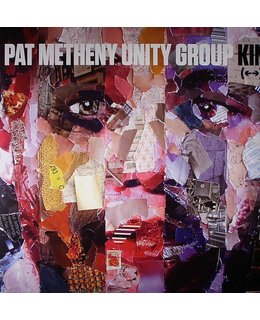 2014 EU issue on 140g vinyl 2-LP + BONUS CD, pressed at Pallas MFG in Diepholz -Last year, for the first time since 1980, guitarist Pat Metheny recorded with a band that highlighted tenor saxophone. Unity Band, which went on to win Metheny his 20th G...

"The core quartet of Chris, Ben, Antonio and I played over 100 concerts over the year that followed the release of our Unity Band record. Over the course of that period, the band became one of those rare combinations of players where the whole is greater than the sum of its parts - it gelled in every way, and that just seemed to beg for expansion and further research. Concurrently, I had been kind of itching to write more in the style that I had developed over the years with my regular groups and projects where there is a lush and more orchestrated kind of compositional conception that went beyond the sonic limits of what a straight ahead quartet might invoke. But I really didn't want to lose the energy, focus and intensity of what this band had developed. I wanted to take it further. If the first Unity Band record was a thoughtful, black and white documentary of four musicians in a recording studio playing, this record is more