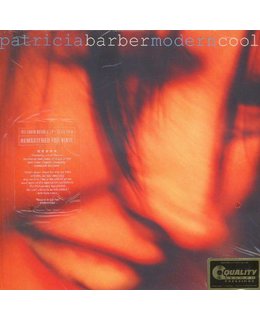 (1998)2014 EU reissue on 180g 2LP-Patricia Barber’s Modern Cool (Premonition Records, 1998) was the recording that made Barber an international jazz star. On the initial tour in support of the album, Barber played a four night stand at The Jazz Standard i

Patricia Barber’s Modern Cool (Premonition Records, 1998) was the recording that made Barber an international jazz star. On the initial tour in support of the album, Barber played a four night stand at The Jazz Standard in New York where she was heard by Bruce Lundvall of Blue Note Records. This led to a string of Barber recordings for both Premonition and Blue Note, worldwide touring and unapologetic critical acclaim from which Barber has never looked back.

Like Café Blue, Modern Cool has been released in multiple formats, including 2013’s Grammy-winning Surround Sound edition. This 180g double LP edition from Premonition is newly remastered by the legendary Doug Sax from the original analog mixes and is sure to be another strong addition to the Barber audiophile oeuvre.

"Sonically, one of the best recordings ever made by a jazz singer with a small acoustic ensemble.” - Downbeat Five Star Review

Tracks:
A1 Touch Of Trash
A2 Winter
A3 Let It Rain

B1 Company
B1 Silent Partner
B2 Light My Fire

The dark, smoky voice of Patricia Barber is quite haunting. On Modern Cool, she mostly sings downbeat songs at slow tempos. All but three songs are her own originals, and they deal with such subject matter as an "homage to beauty" that seems to connect painting one's face with prostitution, loneliness, mindless conformity, the "Postmodern Blues," and other such topics. Barber, whose piano playing is mostly very much in the background, comes across on this set as a pop/folk singer. Most of the jazz moments are provided by trumpeter Dave Douglas, who is on half of the selections and adds some excitement; guitarist John McLean, bassist Michael Arnopol, and drummer/percussionist Mark Walker complete the group.

Kari Bremnes Over en By( Over A City)