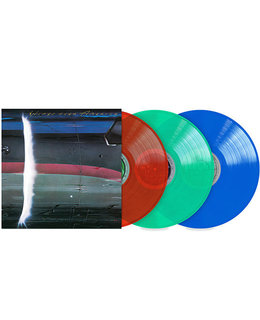 (1976) 2019 EU reissue 180g coloured vinyl 3LP + Souvenir Tour Poster =Remastered at Abbey Road Studios= Wings Over America is a faithful account of the Paul McCartney & Wings 1975-76 world tour, taped at several of the US shows. In addition to Wings' cla

2019 EU reissue 180g coloured vinyl 3LP + Souvenir Tour Poster=Remastered at Abbey Road Studios. A Selected from ninety hours of recordings, Wings Over America is a faithful account of the Paul McCartney & Wings 1975-76 world tour, taped at several of the US shows.

Originally released in 1976, Wings Over America remains one of very few live albums to reach #1 in America (incidentally, the band's fifth #1 album in a row). In addition to Wings' classics like "Live and Let Die," "My Love," and "Let Em In," the collection includes McCartney solo material like "Maybe I'm Amazed" and for the first time since the Beatles broke up six years prior, songs such as "Lady Madonna," "The Long and Winding Road," "Blackbird," and "Yesterday."

For the tour, Paul McCartney brought with him one of the most sophisticated and dazzling rock shows of the mid-'70s (it was a time when nobody worried about extravagance or expense) and the band would eventually perform to more than 600,000 people at 31 shows in the US and Canada, ending with three mind-bending nights at The Forum in Los Angeles. It’s no exaggeration to say that the demand that greeted Paul McCartney & Wings (Linda McCartney, Joe English, Denny Laine and Jimmy McCulloch) in the spring of 1976 as they embarked on what would become their one and only North American tour was overwhelming.

Having released four consecutive chart busting albums including Red Rose Speedway, Band on the Run, Venus and Mars and Wings at the Speed of Sound – not to mention 1973’s Academy Award-winning James Bond theme "Live and Let Die" – Paul’s solo career was in full flight...and having not performed in the States for 10 years either solo or with The Beatles, excitement had reached fever pitch. Now Paul gives fans the chance to be able to immerse themselves in a concert that is destined to live forever!

Rare #1-charting triple live album, Wings Over America is a document of one the most sophisticated and dazzling rock shows of the 1970s or any decade.