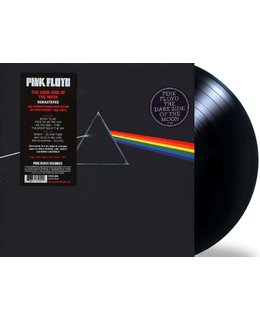 2016 EU repressing remastered on 180g vinyl LP = collector's edition+ HQ Download= The ninth studio album by English progressive rock group Pink Floyd, The Dark Side of The Moon became Pink Floyd’s first number 1 album in the US, remaining on the chart for 741 weeks between 1973 and 1988. One of the best-selling and most critically acclaimed albums of all time, also introduced the iconic album cover artwork by Hipgnosis, after a request for a ‘simple and bold’ design.  T

The Dark Side of The Moon became Pink Floyd’s first #1 album in the U.S., remaining on the chart for 741 weeks between 1973 and 1988. One of the best-selling and most critically acclaimed albums of all time, The Dark Side of The Moon also introduced the simple and bold iconic album cover artwork by Hipgnosis, which features a prism representing the band’s stage lighting

Pink Floyd's 1973 commercial breakthrough album needs no introduction. Lush, immaculate production augments the slow, atmospheric soundscapes of neo-psychedelic rock to jazz fusion and blues-rock. There's no wonder why it stands as the album that anyone who has ever owned a decent stereo has in their collection, no matter their musical tastes. And now it's better.

By condensing the sonic explorations of Meddle to actual songs and adding a lush, immaculate production to their trippiest instrumental sections, Pink Floyd inadvertently designed their commercial breakthrough with Dark Side of the Moon. The primary revelation of Dark Side of the Moon is what a little focus does for the band. Roger Waters wrote a series of songs about mundane, everyday details which aren't that impressive by themselves, but when given the sonic backdrop of Floyd's slow, atmospheric soundscapes and carefully placed sound effects, they achieve an emotional resonance. But what gives the album true power is the subtly textured music, which evolves from ponderous, neo-psychedelic art rock to jazz fusion and blues-rock before turning back to psychedelia. It's dense with detail, but leisurely paced, creating its own dark, haunting world. Pink Floyd may have better albums than Dark Side of the Moon, but no other record defines them quite as well as this one.