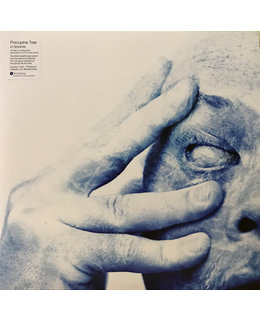 2002-2018 reissue 180g 2xLP = features several of Porcupine Tree’s most loved songs including ’Trains’, ‘The Sound of Muzak’ and ’Blackest Eyes’. ’In Absentia’ was the band's seventh studio album. Remastered by Steven Wilson. The album had a distinctly h

2018 repressed on 180gram VIRGIN VINYL= ’In Absentia’ was the band's seventh studio album. Remastered by Steven Wilson. The album had a distinctly heavier tone, partly due to the addition of legendary drummer Gavin Harrison. It features several of Porcupine Tree’s most loved songs including ’Trains’, ‘The Sound of Muzak’ and ’Blackest Eyes’. While not a formal concept album, many of the songs have common themes related to serial killers, youthful innocence gone wrong, and observations about the modern world, setting a template for many of Wilson's future songs.

B1 Gravity Eyelids
B2 Wedding Nails
B3 Prodigal

C1 3
C2 The Creator Has A Mastertape
C3 Chloroform

reviews:
I call this album the embodiment of the modern intelligent music. This is a brilliant prog-rock album in all aspects - The lyrics is fascinating and you feel that every guitar riff is telling you a whole story except for being a part of a genius melody writing. -MASTERPIECE-

Possibly the greatest album of all time. The perfect mix of hard rock riffs with acoustic and piano led ballads. The only weak spot is a few parts of Wedding Nails, but the rest of this album is incredible

No way would I put Fear of a Blank Planet at the top, so it's between this and Deadwing. Both are very close in quality in my mind, and Deadwing has a much better structure, and concept (and ASBNH is better than most In Absentia songs). But In Absentia as a whole is still extremely well constructed and has better songs on the whole, I would say there's 0-1 weak spots on this album. Also, the surreal, ambient, and creepy factor is definitely higher on In Absentia than Deadwing.

King Crimson In the Court of the Crimson King