Nederlands
Home A Night at the Opera = HS 180g vinyl = 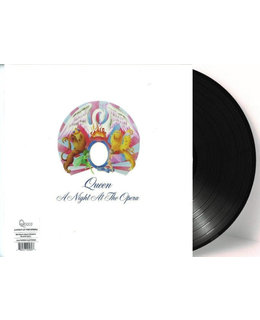 (1975)-2015 EU halfspeed remastered on 180g Vinyl from Original Master Tapes=Queen’s fourth and probably best known album, was recorded in England between August and November 1975. Such was the complexity of the compositions that...

Label:  Virgin- Universal
Availability:   In Stock
Delivery time:
€29,95 Incl. VAT (BTW)
Release date: 25-09-2015(originally released in 1991)
2015 EU reissue pressed on 180g Vinyl halfspeed remastered=Sourced from the Original Master Tapes, Mastered By Bob Ludwig, Cut at Half-Speed at Abbey Road Studios, and Pressed at Optimal in Germany
Queen’s fourth and probably best known album, was recorded in England between August and November 1975. Such was the complexity of the compositions that no less than six different studios were employed with the band members often recording various parts simultaneously in order to work most efficiently and get through it all. The sessions were long and grueling and spanned four long months. Once again the band produced the album with trusted collaborators Roy Thomas Baker and Mike Stone, and what emerged was a genuine triumph on all levels, meticulously pieced together to make the best possible album.
Opera would propel Queen on to the world stage on a mammoth scale and establish them as a major international force. Though it was never in any doubt within the band, it proved that "Seven Seas Of Rhye" and "Killer Queen" were not fleeting hits from another glam-type British wannabe band; Queen were here to stay and "Bohemian Rhapsody" and The Opera would confirm it conclusively for those in any doubt. Referred to by May as “Queen’s Sgt Peppers,” A Night At The Opera is a wonderfully rich and diverse gathering of carefully constructed and, some might say, unlikely compositions from all four band members. Every track is strong and, let’s not overlook the obvious, every moment from beginning to end is beautifully recorded. Opera spans all kinds of musical styles and genres and veers off at tangents as unlikely the album title itself.
Aside from the well known material, also on this album is to be found Mercury’s exquisite "Love Of My Life," which, it is rumored, was inspired by his long time girlfriend of the time Mary Austin. The vocal Freddie delivers on Brian’s epic "The Prophet’s Song," is just awesome and also on his own songs "Seaside Rendezvous" and the delicate "Lazing On A Sunday Afternoon." Brian’s other contributions, "Sweet Lady," "39" and "Good Company" could not be more different, and show their author as a more than competent singer. Brian sings the lead for "Good Company" and "39," but leaves "Sweet Lady" and "The Prophet’s Song," very wisely, to the powerhouse that is Freddie Mercury...clearly at the very pinnacle of his vocal prowess. Roger Taylor sings his own "I’m In Love With My Car," and does so impeccably, making it a highlight of this album, while John too leaves Freddie to take on "Best Friend." The album kicks off in dramatic fashion with Freddie’s acerbic "Death On Two Legs," and ends, rather more sedately with a new mix of "God Save The Queen."
A Night At The Opera very quickly became Queen’s first No. 1 album, and also their first to achieve platinum sales status. The album went top 5 in the US, and achieved gold status there, helped in no small part by extensive and equally exhausting tours around the world. On December 31 1975, three weeks prior to the release of A Night At The Opera, Mercury’s most celebrated composition of all, the gigantic, mesmerizing, spellbinding, ground breaking, epic masterpiece magnum opus – "Bohemian Rhapsody" was released, and took the world, and fellow artists, it must be said, completely by storm.
Tracks:
A1     Death On Two Legs (Dedicated To...)
A2     Lazing On A Sunday Afternoon
A3     I'm In Love WIth My Car
A4     You're My Best Friend
A5     '39
A6     Sweet Lady
A7     Seaside Rendezvous
B1     The Prophet's Song
B2     Love Of My Life
B3     Good Company
B4     Bohemian Rhapsody
B5     God Save The Queen
Albums:
Queen (1973)
Queen II (1974)
Sheer Heart Attack (1974)
A Night at the Opera (1975)
A Day at the Races (1976)
News of the World (1977)
Jazz (1978)
The Game (1980)
Flash Gordon (1980)
Hot Space (1982)
The Works (1984)
A Kind of Magic (1986)
The Miracle (1989)
Innuendo (1991)
Made in Heaven (1995)
Discs: 1
Drager(LP,EP,12,7,CD): LP
Qual(120grs,150grs,180grs): 180grs
Speed(33,45): 33
Extra info: Half-speed Cut at Abbey Road Studios
Label: Virgin- Universal
Originally released: 1975
This release: 2015