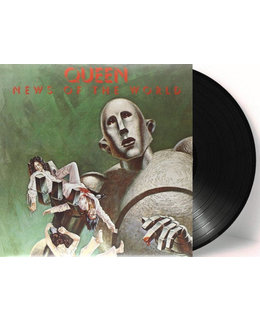 ( 1977 ) 2015 EU halfspeed remastered on 180g Vinyl =Sourced from the Original Master Tapes, Mastered By Bob Ludwig, Cut at Half-Speed at Abbey Road Studios, and Pressed at Optimal in Germany ' features the singles 'Spread Your W...

2015 EU halfspeed remastered on 180g Vinyl =Sourced from the Original Master Tapes, Mastered By Bob Ludwig, Cut at Half-Speed at Abbey Road Studios, and Pressed at Optimal in Germany ' features the singles 'Spread Your Wings', 'It's Late' and the classic hits 'We Are The Champions' & 'We Will Rock You'.

Queen’s sixth studio album was their first to fair better in the U.S. than in the band’s home country. It reached No. 3 in the Billboard chart and achieved platinum sales status in America, while in Britain it peaked at No. 4. News Of The World was a significant departure from the two albums before it – the coupling named after Marx Brothers films; A Night At The Opera and A Day At The Races - not just in its original and alarming artwork concept, but in musical content too, with its comparatively sparse production. The band spent half the time they had previously taken to record this album and this accounts for certain songs emerging with what many would describe as deliberately and conspicuously uncomplicated, by Queen standards anyway.

Tracks:
A1 We Will Rock You
A2 We Are The Champions
A3 Sheer Heart Attack
A4 All Dead, All Dead
A5 Spread Your Wings
A6 Fight From The Inside

B1 Get Down, Make Love
B2 Sleeping On The Sidewalk
B3 Who Needs You
B4 It's Late
B5 My Melancholy Blues

The first single released from News Of The World was the worldwide coupling of "We Are The Champions" and "We Will Rock You," penned by Mercury and May respectively. Eventually the coupling would be Elektra Records’ biggest selling single to date, selling over two million copies. To the delight of Freddie and Brian, "Champions" and "Rock You" were soon taken up by various British and American football teams and supporters, and eventually for all kinds of other sporting events around the world. Today, the two songs are known in every corner of the globe, are universally recognized within an instant of the very first notes, and have been covered, sampled, copied and used in many varying contexts.

Brian's other contributions included the heaviest track on the album in the guitar driven "It's Late," and the contrasting "All Dead, All Dead." One of three songs from Freddie on News Of The World was "Get Down Make Love," complete with risqué lyrics and eerie guitar effects. Another jewel was the sombre "My Melancholy Blues," featuring Freddie on the piano with John and Roger playing a subtle accompaniment. For the very first time, both Roger and John had two contributions each.

Roger’s raw punk-driven "Sheer Heart Attack" (written for the album of the same name but not completed in time), which the author sings on the album, is an extraordinary recording in dramatic contrast to the pairing of "We Will Rock You" and "We Are Champions" that it follows to commence the first side of the album. "Fight From The Inside," meanwhile not only demonstrates Roger’s vocal skills, but also his bass and rhythm guitar playing while Deacon's "Spread Your Wings" is another one of the album’s many highlights.

Metallica And Justice For All = 180g 2LP=remaster