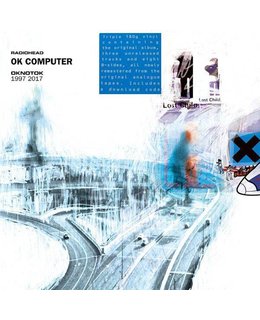 OK Computer was originally released on various dates ranging from May to July 1997. Produced by the band and Nigel Godrich, the album is widely cited as one of the greatest works of Radiohead's - or any artist's – catalog and was the first Radiohead record to reach No. 1 in the UK and to be be nominated for the Album of the Year Grammy. The album is home to the band's cornerstone singles "Paranoid Android," "Karma Police," "Lucky" and "No Surprises." In 2015, The National Recording Registry selected OK Computer to be preserved in the Library of Congress as a recording that has proven "culturally, historically, or aesthetically significant."

with color printed inner sleeves housed in a gatefold jacket.
Includes a download code card for the album (MP3 or 16/44.1 WAV files).

Tracks:
LP1
Side A(IP)
A1 Airbag
A2 Paranoid Android
A3 Subterranean Homesick Alien
Side B(Skip)
B1 Exit Music (For A Film)
B2 Let Down
B3 Karma Police