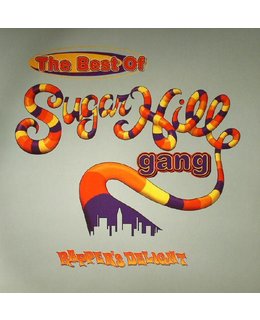 2015 US issue on 180g 2LP= The definitive collection of the rap pioneers! Include single, "Rapper's Delight" & a bunch of other party-jam hits, "Apache," "8th Wonder" and "Showdown," their rap-off with the Furious Five. What they're saying isn't really

2015 US issue on 180g 2LP= The definitive collection of the rap pioneers! Kicking off with that epochal 1979 single, "Rapper's Delight" (the first rap song to hit the Top 10 on the Billboard pop chart), it includes all of the band's R&B hits in their original 12-inch versions, many of which make their CD debut. Completely remastered for best-ever sound (in addition to containing new liner notes), it's a delight for both rap and pop fans alike!

Rapper's Delight--15 glorious minutes of the bass line from Chic's "Good Times," with a New Jersey crew spieling goofy routines about Superman and bad food on top--is one king hell of a party-starter. After that, they could have filled the rest of the disc with crowd noise and gotten away with it, but the Sugarhill Gang had a bunch of other party-jam hits, notably the almost-as-indelible "Apache" and "8th Wonder." Those songs show up here too, along with some entertaining non-hits and "Showdown," their rap-off with the Furious Five. What they're saying isn't really the point; the point is to move the crowd, and they're still hip-hop's greatest entertainers. Douglas Wolk

Outkast Speakerboxxx / The Love Below =4xLP=